“The General will now enter the room.” 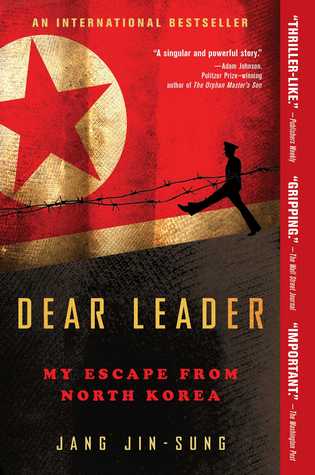 Who isn’t curious about North Korea? It is a strange and secretive country with an eccentric, peculiar, and potentially very dangerous leader that shuts out the world. How much of the North Korean propaganda is true? Are the people there truly sheltered and do they suffer? If you believe this defector and author of this memoir it will only make you hungry for more information on this fascinating country.

Jang Jin-Sung, a pseudonym for a North Korean man who was a famous and well-respected poet and government official. His life was much easier than many of his other friends and family due to his high ranking status. He was special as he was allowed into the small inner circle of people who got to meet their “Dear Leader” in person due to how well received his poetry was. Jin-Sung worked within The United Front Department (UFD) which is “responsible for inter-Korean espionage, policy-making and diplomacy” and in Jin-Sung’s job he was responsible for writing poetry and praise for North Korea under the facade of the praise coming from other countries, like South Korea. In order to do that, he was allowed to read South Korean newspapers and writings in order to keep with the style and approach of the writers there. The work was dangerous and highly controlled as with new ideas comes the idea that the North Korean regime is lesser. However, Jin-Sung began to question his “Dear Leader” after meeting him in person and after following a trail of dangerous thoughts and actions it eventually made him realise that he needed to defect or risk his life and potentially his whole family’s.

The harrowing description that Jin-Sung leaves an impoverished stifled and scared nation of people is hard to read. His escape is tragic and reads like a terrifying thriller that you are too afraid to look away from. I was completely engrossed in the story and was left hungry for more by the end. Books like this and others like them have come under scrutiny for their authenticity or have left many wondering how much was embellished for the sake of publications. It is almost easier to NOT believe that North Korea is a terrible as this book makes it sound as it is hard to fathom that so many people are living in such an oppressed and psychologically inhumane way. If this novel is as true as the author claims, it makes me thankful that my life is my own, that I have food in my belly, and that I express myself how I see fit.

“One reason why North Korea is unable to pursue reform and open itself more to the world is that this would risk exposing core dogmas of the state as mere fabrications.”

Whether you want to believe all, some or none of what is in this book you can’t deny the books high readability and enjoyability. In fact, this book made my top five favourite non-fiction reads of 2017 I enjoyed it so much. I would highly recommend this book to anyone interested in history, espionage, North Korea or memoirs. I can assure you that Jin-Sung’s story is not one you are likely to forget.

One thought on “Dear Leader by Jang Jin-Sung”