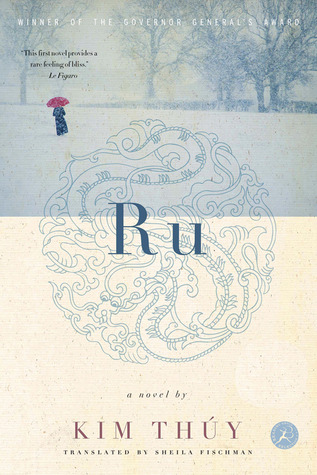 The is the first book from the Canada Reads 2015 shortlist that I’ve managed to get through so far. Ru is a poetic, beautiful and tragic examination of a young girl’s move from a war-stricken Vietnam to Canada. Partially auto-biographical, the title of the book is symbolic and significant as in Vietnamese, the author’s native language, it means lullaby or to lull, and in French, her adoptive language and the original language that the book was published in, it means small stream or the flow and release of tears, blood or money.

Each page  of the book almost looks like a letter, in that some of them are written in a block format and the paragraphs are indented so that the content is in the middle of the page. This style adds a poetic feel to the novel and each of these sections are a string of memories that fit together to create the novel. In my opinion the style was carried out successfully and added a lot to the feel of the novel. The book does not have a straight forward timeline but you gather the information as it comes. You learn that the young girl was born into a fairly wealthy and intelligent Vietnamese family but it that meant nothing when communism started to spread. The nice home that her family had built was quickly bombarded with communist soldiers and her father made the difficult, but necessary, decision to abandon their home and flee their country for their own safety. Many families shipped their children away during this time if they could not manage to all go themselves and the young narrator reflects on how she never understood how families could separate themselves that way, even if it was for their own safety,  but it wasn’t until she had had children of her own that this made sense to her.  The narrator’s grown perspective on her memories, are what create the most intriguing and dynamic parts of the book.

Once in Canada, the narrator reflects at her families resilience to make a life for themselves, especially her mother. In Vietnam, her mother did not work, yet in Canada, without batting an eye, she picked up work in areas that she had never performed before. Her mother was especially hard on her to get her to interact with this new world, even if that meant moments of embarrassment or shame. Through her mother’s persistence, the shy narrator was able to get through some extremely trying moments as she learned the languages of her new country and eventually, adapted as well as her mother.

There is one moment in the book that really sticks out for me, in which the narrator remembers taking a compliment when she was working  in Vietnam. Someone had told her that she was pretty enough to be the bosses escort, which, she found very flattering at the time. That was until, in another memory recalls looking upon four naked Vietnamese escorts who were having money thrown at them as if they were dogs. It was a powerful moment of transition and realization for the narrator as she made a comparison between the two memories.

What struck me most about this book was the realization of my own privilege and how I will never truly comprehend what life could be like for an immigrant. It puts matters into perspective when you realize the trivial things that you consider real problems. I’ve never had to forcibly leave my home, learn another language and suffer in true poverty.  I can’t imagine how lonely it might feel when the people you are surrounded by in your new country have no real concept of what you left behind, what you’re trying to accomplish now and the many hurdles that you’ll be presented with. As someone born into a place like Canada, I will not likely ever see those hurdles or have to deal with them myself and for that I am grateful. However, there is a blissful ignorance that comes into being born into a place like Canada, in that a person’s world and perspective can be so very small if they do not choose to look outside of it or experience something different. There is a reason that many people who come from suffering or from nothing persist and succeed and while it can be attributed to ambition and motivation, I also think that their unique experiences with suffering and change create a life perspective that cannot be taught.

I believe that Ru is the story of many immigrants, the ones with happier endings anyway. The book really does fit the theme of this years Canada Reads, which is books that break barriers. These are the stories that make Canada what it is and shape the people that live here. Our nation is one of strong and resilient people, many of whom come here looking for something better than what they had. I would recommend this book to any Canadian or for anyone looking for inspiration.

3 thoughts on “Ru by Kim Thuy”