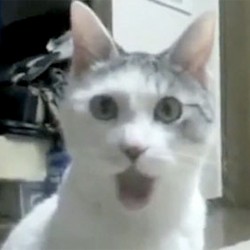 My God, nothing in this world could have prepared me for the last 100 pages of this book. This novel is by far the best in the series so far. In this book, every man claiming to be a king collides and they collide hard. What you expect or want to happen, doesn’t, and it makes you want to throw the book against the wall in disbelief. My boyfriend gave me some funny looks when I screamed out in protest  to numerous scenes while reading this book. Oh and just when you think you have it sorted out and you’ve come to terms with the madness that’s ensued you read the epilogue and your mind is blown once again. Seriously, this was my face:

It’s so hard to discuss this novel without giving away all of the essential twists and plot-changers! It is however impressive that Martin continues to remember so many details and have the story flow so well between one character’s chapter to another. Even more impressive, is the amount of growth that each and everyone one of the characters (that are still freaking alive, that is) go through in this book. You learn that Jamie Lannister is actually a good man, that you can sympathize with Cersei and hate her at the same time and how little Tywin really thinks of his dwarf son Tyrion. You watch Jon become a man and learn about a world outside of the Watch, that it is possible for Sansa and Catelyn to tolerate even more grief, that Dany and Robb have to make a few very difficult decisions and you get to see Arya becoming vicious and Sam become brave. Well, I suppose the exception being Joffery, he doesn’t change. He’s still a twat.

What this novel makes me ask now, is where is the series going? There were times where I felt I should have seen certain twists coming and yet, I didn’t, because Martin doesn’t do anything ordinary in terms of character investment and plot. Which leads me to ask: What is the outcome that Martin see with these characters? Who does he want sitting on the Iron Throne?  I can’t even fathom what it going to happen in the coming books with the shit-storm that Martin put in this book.

Well I have to read the fourth book now! I have actually already purchased it and will tackle it as soon as I can get over the emotional turmoil that Martin put me through.