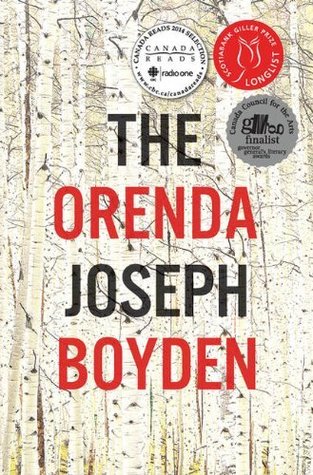 I saved this book for last as it is the winner of this years Canada Reads series and I also took my time reading it and that’s for a good reason. As a Canadian, you get inundated with the history of the natives that first lived here and the influences that the Europeans had on the local tribes, so as a reader, it is isn’t a topic that I’m really overly interested in anymore. However, when I first picked up The Orenda I wasn’t sure what to expect as I had never read anything by Boyden but after reading the first chapter I was surprised. This book is different. The chapter opening is intriguing and spiritual, yet initially vague on character details which makes you want to read further to get a better understanding. From there, the book opens up to a world that is described like none other. So I took my sweet time with this book to revel on every detail.  Not only has Boyden been able to write a relevant historical-fiction Canadian natives, he is really good at it.

This book is narrated from three very unique perspectives: Bird, a Huron warrior; Snow Falls, a young Iroquois girl whose family was killed by Bird; and Christophe, a French missionary who has come to Canada to spread the word of God to the natives.  The orenda, is what the Huron call the life-force of all things, not just of humans and it what connects everything to each other and perhaps what brings the main characters stories together.  Each of these characters are from different cultures and have different perspectives but they are all intertwined in one land and will be immersed in the same war.

Bird is a proud warrior stilling mourning the brutal death of his wife and daughter at the hands of the Iroquois, a tribe similar to his own that they are enemies with. He encounters Snow Falls and slaughters her family, yet spares her with the intent of making her is adopted daughter. Snow Falls is peculiar but unique and understandably starts off loathing Bird and she goes out of her way to pester and aggravate him. This is how she ends up being one of Christophe’s first converts. Christophe is one of first missionaries to this area and after a begrudging agreement he allowed to come along with Bird and his tribe. Christophe is determined to save the natives and show them the ways of the Lord, and while he is a legitimately kind, intelligent and compassionate man, Christophe cannot fathom any spiritual way of living besides Christianity. He does however, learn their language and come to appreciate the people. After a deal is made with the Hurons and the Jesuits, more missionaries are allowed to mingle but with them they bring the unfortunate spread of disease and furthering the tensions between the Huron and the Iroquois tribes.

Boyden gracefully intertwines the brutality and violence of war and torture with the spiritual and meditative traditions of the native tribes, a history not so easily described.. Throughout their differences and through the violence each of the characters grows and connects. The narrative is so engaging that you feel like a shadow that follows each of these characters footsteps through the snow and their suffering.

A must read for any Canadian and historical-fiction lovers.