This is why we need books. How else could we, being privileged to be born in a safe country, possibly know what a person like Abu Bakr has been through. 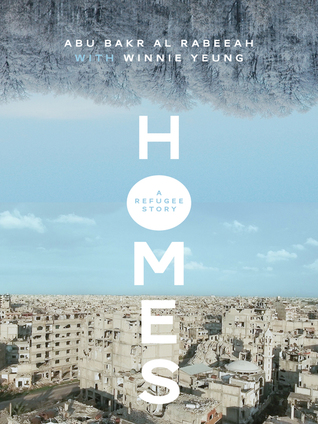 For those that know nothing about this book going into it, as I did, I encourage you to keep it that way because by the time I got to the end I was blown away on how this novel came to be. Also, I don’t know about you but as a Canadian, this book fills me with pride knowing that we are continuing to make this kind of impact, especially considering the current political atmosphere. I read this book in one sitting because I was so in awe of Abu Bakr’s story.

This is the first book in the Canada Reads 2019 shortlist that I have read so far. Will it take the cake during the debates? We will find out.

Abu Bakr and his family were originally from Iraq but when tensions turned violent over Shias and the Sunnis his father made the decision to move to Syria in hopes of a safer and better life. Abu Bakr is just a boy when he makes this move and initially, he is filled with excitement as it means that he gets to be close to his cousins. However, this safe haven turns into a war zone under president Assad and Abu Bakr’s childhood is robbed from him as he comes into his teenage years knowing the sounds of bullets, the colour of blood and ripped flesh, as well as intense grief and fear as it rips through Syria. Abu Bakr’s father had a plan from the start when they moved to Syria and it was to get on a refugee list with the UN. He was diligent and he called all the time to try and get his family somewhere safer. His diligence eventually pays off but it still comes with a steep emotional fee for Abu Bakr and his family.

Once in Canada Abu Bakr and his family face a new set of trials, starting with learning English since none of them speak a word. Here Abu Bakr gives an honest account of his first-time experiences in Canada and how he learned to connect with others through soccer.

So here is where I think the spoiler is, as I am reading this book I got the impression that Abu Bakr is full grown man discussing his childhood and how he came to live in Canada with his remarkable and tragic story. Then I get to the acknowledgements I come to realize that Abu Bakr is still a high school student and has only been in Canada a few years! With the help of his English teacher, Winnie Yeung, the two of them create this moving story of his journey to Canada.  What an achievement! I mean, what the hell were you doing when you his age? Certainly not learning how to survive in a war-ridden and death-filled country and then learning another language to write a selling novel about the whole ordeal. This is why we need books. How else could we, being privileged to be born in a safe country, possibly know what a person like Abu Bakr has been through. How can we come to appreciate what we have with gratitude? We listen and we read.

For anyone that doesn’t understand the refugee crisis and supports closing borders, I beg you to read a few more books like this one. Stories of immigration and refugees in Canada are becoming more prominent and it’s because it’s becoming a part of who we are and their stories are becoming ours. This book felt extra special to me as Abu Bakr moved to a city that’s three hours away from where I grew up and knowing that he has had a positive experience with Canadians warms my heart. I would highly recommend this light, short, and moving read for any Canadians. I would also extend this book recommendation to any Americans who want to know more about the positive experiences of keeping your borders open.