The first two books that Murakami ever had published. The start of his remarkable writing career. 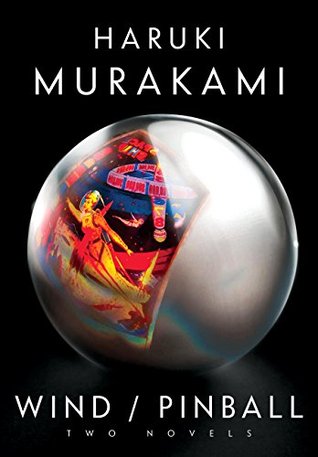 I am going to review these two novels at the time same as they really are the same story. I imagine had these novels not been Murakami’s very first he would have put them together into one, though technically there are two more books in this loose series, though I have yet to read them.

In the first novel, Hear the Wind Sing, an unnamed male student is visiting home during the summer break. Like many youth, he spends his days at a local bar called J’s drinking and smoking. It is here that he likes to converse with his friend, the Rat, until the early hours of the morning. Rat appears tough and impermeable but there is a lingering tension about his latest love interest. The narrator becomes involved with a young woman who happens to be missing one of her fingers.

In the second novel, Pinball, 1973 the same unnamed protagonist, having finished school, has started up a successful translation company. His life is uneventful until he randomly meets a set of twins who abruptly move in with him, in which an intriguing affair begins. The protagonist has not seen the Rat in a long time and has not been to J’s bar as he becomes obsessed with tracking down a particular pinball machine that he use to play. Meanwhile, the Rat is spiraling into depression and on the brink of falling apart.

As with many Murakami novels, loneliness and isolation are the most prevalent themes. In Hear the Wind Sing, the two male character’s nightly chats are emphasizing their loneliness and search for love that alludes them with their sexual conquests. The nine fingered lover suffers from isolation after having an abortion. The narrator’s quest for the nostalgic pinball machine is a way for him to alleviate his loneliness and relive what he remembers of love, happiness and friendship. In Pinball, 1973, the narrator and the Rat do not meet, further stressing this theme.

It was clear that these were Murakami’s first books as his style is not yet fully developed, making both of the story’s less ubiquitous than his more popular novels. It was relieving to hear that even Murakami is not a fan of these first few novels. Murakami was actually opposed to having them translated into English even though he admits they played an important part in building his career as a writer.

As a Murakami fan, I am glad that I read these novels, as it has allowed me to see how his writing career and style developed. As a reader though, I did not take a lot of pleasure from either of them, especially Pinball, 1973. Neither novel was very concise and while the themes were present the stories felt dull and lacking. The characters felt underdeveloped and I was left wanting to know more.