“Destiny isn’t the judgements of providence, isn’t scrolls written by the hand of a demiurge, isn’t fatalism. Destiny is hope. Being full of hope, believing that what is meant to happen will happen.”

If you’ve played the Witcher 3: Wild Hunt, this book fills in some interesting pieces of that game that aren’t mentioned or discussed, however, the plot differs in terms of the main antagonist.

Continuing from where The Tower of Swallows left off, Ciri finds herself in an unknown realm on her own. The realm is unfamiliar to her and the elf inhabitants are unpleasant and indifferent to her despite their apparent vested interest in her as the child of prophecy. She is held captive by the elves and needs to find a way to escape this realm and find her way back to Geralt, despite the dangers she still faces in her own realm both from the war that is raging and from the Bonhart, who tortured and is still chasing her.

This read was an exciting end to Geralt and Ciri’s story and I thoroughly enjoyed reading about Ciri’s times with the elves and the escapades it took to get her out of that realm. These last two books were the best in the series so far, next to The Last Wish (still the best Witcher book, in my opinion) and if you play the games, these books provide interesting details on characters and additional storylines that aren’t explained in the games. A solid read and a great finale to the series.

“They are not demons, not devils…Worse than that. They are people.” 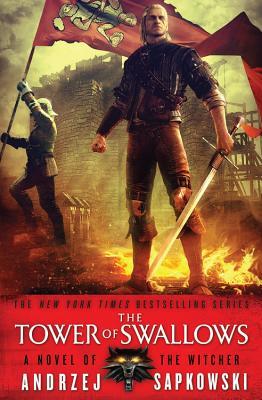 It’s been a pleasure to read this book while also playing and being completely engrossed by the Witcher 3: Wild Hunt video game. There are so many characters and story references that are alluded to in the video game that come from the book series that would make no sense to anyone who has not had the pleasure of reading them.

After finding the last two books in the series full of too much lore and politics, this was a much needed change of pace. Geralt can’t find Ciri, the child of prophecy, and war is erupting all around. The plot of this story focuses mostly on Ciri and how she manages to escape the capture of a terrifying bounty hunter, as well as realising how much of the prophecy involving her is true. The writing style still feels a bit clunky, similar to the others in the series, but it’s hard to determine if that’s the fault of the translator or the author. The story itself is still immensely gripping, however, and I would mark this book as my favourite next to The Last Wish. A must-read for lovers of the the Witcher series and video games.

If watched or read the book, what are you thoughts on them? Did you enjoy one and not the other? Or did you like/dislike them both?

You know, the problem with not doing book reviews within the same week that you read them is that the ones that don’t make an impression then become hard to write about because you forget about them. Eh, my bad. Let’s see what I can pull together for this review.

Cursed is an interesting take on the story of King Arthur. Nimue is of the fey people and is an outcast in her own community due to her mysterious and uncontrollable powers. When the fanatical human religious group called the Red Paladins begin exterminating her kind, Nimue’s mother sends her off with a mysterious sword with strict instructions to bring the sword to Merlin, a fey who is considered a traitor to his kind. Merlin has been working beside the human king and seems to have lost his powers so he takes to drink (a lot) and tries to fool others into thinking he is still powerful. Yet Merlin can sense something is stirring within the magical realm and feels a deep connection to the sword. Nimue is assisted by a human mercenary named Arthur who helps her escape the Paladins in her journey to deliver the sword. Throughout the journey, Nimue becomes the voice and figure of hope for the fey people as she wields the sword and uses her magic to combat the Paladins. The Paladins call her the Wolf Witch and they want her head but Nimue is resistant to this heroic role that she has been thrown upon her as she now finds herself responsible for the fate of her own people.

Nimue is supposed to represent the average underdog but she was not the heroine I was hoping for. I was often disappointed with how she handled herself in situations and there were a few very stereotypical YA tropes that took place within her character, the plot, and Nimue’s relationship with Arthur. Conceptually I enjoyed this book, it’s a great idea, but it wasn’t as exciting as I was anticipating. For one, and sorry to Frank Miller and his fans, the artwork wasn’t what I was expecting and it felt really disjointed from the story and writing and added absolutely nothing to the plot for me. When I picked up this book I was actually expecting a graphic novel as I knew that Frank Miller was apart of it, I didn’t actually know it was a novel. The images felt like they were meant for a completely different plotline and that perhaps Frank Miller was not the best choice of artist for this story like somehow a YA novel shouldn’t be paired with one of the most violent graphic novel artists? The artwork wasn’t even all that prominent even, just a few images thrown throughout the book. It’s like the publishing company knew that by having Frank Miller put in a couple of images the book would do better.

I didn’t hate the book but I was disappointed with it. It had the potential to a really engaging and unique take on a classic story. I watched some of the TV show on Netflix and felt the same there too. It was interesting but engaging so I didn’t even bother to finish the season but at least I finished the book.

If you watched or read the book, what are your thoughts on them? Did you enjoy one and not the other? Or did you like/dislike them both?