Mavis Gallant was highly recommended to me from a good friend of mine and I finally took the time to follow-up in this recommendation. Mavis is a talented writer but I don’t think her writing it for everybody.

While born in Canada, Mavis actually spent most of her life in France, which is extremely apparent in this collection of stories. Her writing felt very European as every story in this book was set somewhere in Europe and the tone and the personality of the writing and characters had a very European feel. If I had not know that Mavis was Canadian I would have presumed that she was a European, writing about Europeans, for Europeans, and maybe the latter of the two are true. However, this could also be because the stories seemed to reflect a period of time around the 1950s, a time frame that I found difficult to relate to in her writing, so her characters and their woes felt very foreign to me.

What I was able to appreciate in her work is how well the theme of being ‘in transit’ is used in each individual story. All of the characters in this collaboration of short stories is going through a phase of change, revelation, growth or progress in their personal lives. Mavis details the struggles, and often the options that the characters have in order to proceed through the phase of change that they’re faced with, but every story ends right before the pinnacle of the characters decision. I found this jarring at first but by the time I finished the book I saw how fitting it really was.

While I wasn’t overly enthralled with this collection I haven’t given up on Mavis yet. I think that her writing is good and it reminds me of Hemingway, which I have a love/hate relationship with. So like Hemingway, I’d like to read more of her work to get a better feel for her.  Overall I would recommend this book to anyone who has also recently found themselves ‘in transit’.

A big thanks to Netgalley for an ARC copy of his book.

Ever since grade 12 social studies and the animated movie Anastasia, the Romanov family has fascinated me. What makes this book unique and better than most historical non-fiction, is that it read more like a fiction. This book made the Romanov family real, made them look like a regular loving family which is not the portrayal history gives them. Nicholas is by far more remembered for events like Bloody Sunday than he is as being a supportive husband and father and dedicated family man. Alexandra is remembered for being sickly and outwardly cold toward the press when really she spent so much of her time and energy helping others and being a dedicated mother to her family despite what was expected of her in terms of being royalty. The family was brought together by love, as Alexandra and Nicholas truly loved each other and married for love and their children were well-rounded examples of their love and dedication to their family.

The Romanov’s were executed in Yekaterinburg on July 17, 1918 at the peak of Russia’s first revolution, also know as the February Revolution. Russia was suffering economically and socially which was made worse by the outbreak of WWI.

While the book is titled, the Romanov Sisters, it ultimately talks about the whole family. The Romanov’s were the celebrities of the 1900’s and everyone talked about them. The Romanov’s had four girls: Olga, Tatiana, Maria and Anastasia. Olga was the oldest, being 23 when she was executed, Tatiana, second oldest at 21, Maria 19, and Anastasia at 17.

This book captures the finer details of the girls personalities and intelligence. Olga was known for her religious piety, beauty and for being the most like her mother in personality, while Tatiana was known the most for her beauty out of all her sisters but was also a leader and took charge when her older sister was unwell. Both girls were highly desirable for marriage but their parents insisted they married for love. They both died unmarried.  As the two of them were closer in age, they became a very close pair. Maria, was more broader built than her sisters but had a notoriously good nature and was very close to Anastasia. Anastasia, was known for her voracity, energy and charm. She was a bit of troublemaker but she had an amazing sense of humour and often made her family laugh. 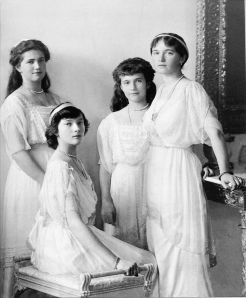 All four of the girls can be described as amazingly down to earth. They loved to get dirty and play as children. Their parents did not lavish them with expensive accessories, toys or furniture. The girls were polite, kind and well-rounded. I was surprised to learn that when the war broke out, all of the girls volunteered and trained as nurses to heal wounded Russian soldiers and spent the majority of their time in the hospital. Especially Olga and Tatiana. The did not want to be treated like royalty during these times and enjoyed connecting and talking with the soldiers. Even dreamed of falling in love with them.  Another interesting fact about the girls, is that at one point, the girls all came down with measles, in which the medication they were given at the time caused their hair to thin and fall out. They all shaved their heads. The girls were so good-natured that it didn’t appear to overly bother them and quickly gave up wearing scarves to cover their bald heads.They were amazing role models and broke the mold of what it was be a Russian Princess. All of the girls were extremely well liked.

Having five children took its toll on Alexandra, especially the pressure when she didn’t produce a male heir, Alexei, until her fifth and final birth. Alexandra was not your typical Tsaritsa as she wanted to be personally involved in the upbringing of her children. She breastfeed them and raised them, which was unheard of for a royal family member. Unfortunately, Alexei had inherited a medical condition from Alexandra’s family, hemophilia. This condition inhibits the body from clotting blood and so any minor bump, bruise or scratch and cause debilitating and life threatening internal bleeding. So Alexandra’s worry was never-ending. She was overprotective of her only son and it took a big toll on her own health, in which she would have to rely on her eldest daughter, Olga to look after him when she was unable to. This is also how the family because close with the notorious Rasputin.

Both Nicholas and Alexandra were very religious and passed their faith onto their children. Rasputin was a religious mystic with a mixed reputation. Alexandra became desperate when Alexei experienced a major stint of painful internal bleeding in which, the doctor’s could offer no assistance. The world at the time did not know of Alexei’s condition and she was desperate to save her son. Rasputin was called in, he prayed and declared that the boy would live, which he did. There were many instances like this which caused the Romanov family to rely heavily on Rasputin for Alexei’s care. There were absolutely convinced that Rasputin was the only man capable. Alexandra especially believed that her son’s health and fate were tied to Rasputin’s religious gifts and would trust no one else’s advice, even if it was rumoured that Rasputin was not a good man out in his normal life.  It was this relationship that started rumours about how much influence Rasputin had with the Romanov family. Strangely enough, Rasputin warned Nicholas of WWI, and begged him not to become involved as he believe that it would bring about their demise, which he was right about.

Nicholas’ abdication of his throne was done largely for his family and to protect his son. Unfortunately this decision also ended up being his families demise as they were placed under house arrest by the Provisional Government. The family kept hope and tried to live life as normally as they could.  The intentions were to protect the family from the rising revolutionaries but it quickly turned to wanting to put the Tsar on trial and then the whole family to death to ensure that revolution continued and that a support rally was not gathered.

This book opened up how tragic the death of this family truly was. The children’s young lives ended so early when they had done no wrong, and parent’s that were doing the best they could while also trying to manage and run a country. The book was highly engaging and very interesting read and I highly recommend it to lovers of history for those intrigued by the Romanov family.

I’d like to thank Netgalley for the opportunity to review this book!

Misconception is a very short erotica novel that is the first in the Finnegan Brothers series. The novel follows Lena, a young college student whose parents have recently divorced. Before leaving her hometown she was in a relationship with Blake Finnegan, who has an older brother named Slade. Things were really strong between Lena and Blake but on the night her parents break the news to her about their impending divorce, Lena makes a pretty naughty decision. With not even a goodbye, Lena leaves town with her mom and sister where she hopes to leave her past behind her. Unfortunately a few years later, her father is getting married and she is required to return back to her hometown in order to attend. ***MILD SPOILER*** She hopes that the Finnegan brothers have left town and that she won’t have to worry about encountering either of them but as fate will have it, she runs into both of them in less than ideal circumstances.***END SPOILER***

I’ll just say it, I hated Lena. She is juvenile and made some really poor choices so it made it really hard to like this novel. I mean, I know that most erotica characters have to make some poor choices in order to find themselves in some sort of sexual dilemma but I had little sympathy and interest in Lena so it really took a way from the focal points of the book, which, are the sex scenes. With that being said, I wanted way more sex as there were only two sex scenes in the entire book. I know that this novel is short but I really wanted more, mostly because I didn’t care about Lena or the divorce or anything like that. Sadly, because I wasn’t involved in the characters, the sex scenes that did exist really lacked luster for me. ***SPOILER*** Besides, Slade is a womanizing asshole so there isn’t anything sexy about that.***END SPOILER***

I should also mention that this book has a major cliff hanger at the end. I’m sure it was a marketing ploy because based on the length of this book I can’t imagine it was meant to be read on its own.  So if you like series, can tolerate cliff-hangers and are looking for a quick read that may raise your pulse a mild amount, then give this one a go. You may have more tolerance for Lena than I did or find yourself involved in the story a bit more.