“There is a moment, a cusp, when the sum of gathered experience is worn down by the details of living. We are never so wise as when we live in this moment.” 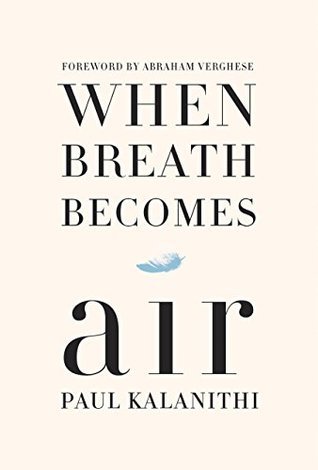 It’s not very often that a book can marry literature, science, and philosophy together and it’s even rarer when it’s a memoir. Then again, the author of this book also seemed to be a rare human being. One that was taken from this world far too soon.

Losing someone you love to cancer is an exclusive club that nobody wants to be a part of, in that only those who have known the pain of it can truly relate to it. At the same time, it becomes such a defining and all-consuming part of your life that you can’t help but also be drawn to anything relating to it. This is how this book found my reading list.

The opening foreword by Abraham Verghese gives you your first powerful impression of what Paul was like and draws you in from the first page. Paul Kalanithi was an accomplished neurosurgeon whose first love was writing and reading, a venture that almost had him become a professor instead of a surgeon. He found himself in the medical field due to his own questions of life and death, often brought on by the literature that he read. Initially thinking he’d do psychiatry, Paul fell in love with neurosurgery and became one of the best. When Paul was diagnosed with stage IV lung cancer, his deep intrigue with life and death took a whole new meaning.

Despite his illness, Paul decided to continue doing what he does best, being a neurosurgeon. Paul gives the details of how he came to medicine and how he grew as a physician, not hiding his faults as he progressed in the field. His diagnosis changed him from a practitioner to a patient and it gave him a wholly different perspective on his patients and the type of care he and the system provided. Paul and his wife decided to try for a child despite his dire situation, a child he was able to see and spend time with for a few brief and magical months. He started with the hope of leaving his daughter something of him in writing this book.

Paul melds his talent and passion for writing with his ideas on science, death, and dying creating this moving and masterful work. I am so thankful he shared his ideas and vulnerabilities with the world as this book has left a lasting impression on me, as it has, no doubt for many others. Paul faced death with an immense appreciation for life and what he had and made the most out of every second, a lesson that he shared through his writing. Actively living and actively dying are two sides of the same coin and the side that you want is one of your choosing.

This book feels incomplete because it is. Paul had so much more to share with the world and with his family but cancer cut his life short. Isn’t that always the way of things, though? Never enough time. While poets have been writing on this topic for more than a century, Paul’s story is a modern telling of the beauty and fleetingness of life.

This book is suitable and recommended for any human but I think especially those going through times of struggle or transition. Paul’s words are raw, comforting, and a gentle reminder of what we have to be grateful for while exploring death and life’s meaning.