“I thought once that gods are the opposite of death, but I see now they are more dead than anything, for they are unchanging, and can hold nothing in their hands.” 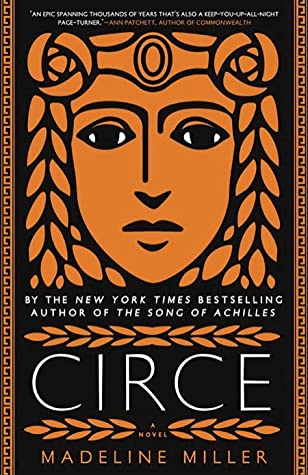 This book was on my library waiting list for such a long time but let me tell you, it was worth the wait. This book popped up on my radar on Goodreads and a few book sites I follow with raving reviews for its unique and accessible approach to some classic characters of Greek mythology. Madeline Miller holds an MA in Classics and teaches high school ages students Latin, Greek, and Shakespeare. A feat, that is is no easy task. I would not call Circe a young adult novel because it’s truly a piece of literature that is accessible to all ages.

Circe is the daughter of the titan, Helios. She is considered unremarkable in comparison to her family as she bares no talents, powers or abilities worthy of her heritage. Always under the watchful and wrathful eye of the gods, Circe finds herself interested in and drawn to mortals, and even falls in love with one. Her love allowed her to do something not even the Gods thought was possible as she turned her lover into a god. Circe soon learns that she is actually a sorceress with remarkable transformative abilities that are capable of feats that make even the gods uncomfortable. After a regretful transformation made out of jealousy, Zeus banishes Circe to a remote island near the mortal realm for eternity. On this island, Circe comes of age, as grows and hones her skill as a witch. She sees the unfairness of her sex and the treatment she endures as a result. She also comes to distance herself further from the gods as she cannot understand the lack of empathy the immortal and powerful gods have towards mortals. During her time on the island, she encounters some of the most famous figures mentioned in Greek mythology.  Unfortunately for Circe, a woman alone, especially one of power with disdain for the gods will not go unnoticed for long.

“Humbling women seems to me a chief pastime of poets. As if there can be no story unless we crawl and weep.”

Circe is a story of choice, accountability, and empowerment. Circe starts a naive and passive woman who grows and comes into her own. She makes mistakes but owns them and stands for what she believes in against immeasurable odds. Circe’s struggle is relatable and it brings to life classic stories and characters from mythology whose original publications may feel unattainable or unenjoyable for the average reader. Circe also gives a different perspective on these characters as well as interesting interpretations for some of the things that each character did in the original Greek stories.

“It is a common saying that women are delicate creatures, flowers, eggs, anything that may be crushed in a moment’s carelessness. If I had ever believed it, I no longer did.”

The writing is gorgeous and intelligent, showcasing Madeline Miller’s feats as an accomplished academic and storyteller. I’m thrilled that she has published other books meaning I have a chance to enjoy more of her thoughtful writing style and character work. I can 100% say, that this book is absolutely worth all the hype and accolades. If you enjoy historical fiction, mythology, fantasy, classics, or feminism I think you will absolutely devour this book.

One thought on “Circe by Madeline Miller”