“Only women there—and children,” Jeff urged excitedly. “But they look—why, this is a CIVILIZED country!” I protested. “There must be men.” 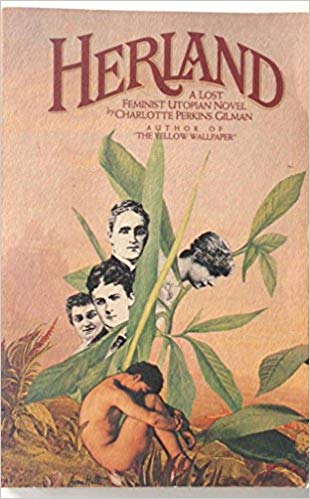 While it isn’t necessary to read Moving the Mountain before this book, I would still recommend it as it sets the basis for the author’s ideas.

Three male explorers, Terry, Vandyck, and Jeff stumble upon an all-female society. Not wanting to believe it at first, the three men are forced to reassess their views on women in their own society and the basis of some of their beliefs about women. This society of women is strong and educated and live harmoniously among themselves and are able to reproduce asexually. For these women, nothing is more revered than motherhood and the harmony of their society.

While Van and Jeff come to understand, learn and appreciate this all-female society and are humbled by its feats and the women within it, Terry, however, cannot get past his own insecurities and that fact that the women in this society don’t fall for his patriarchal charms. The men fall in love, Terry unsuccessfully with Alima, Jeff with Celis, and Van with Ellador. Terry can hardly wait to leave and continues to get frustrated that this society doesn’t meet his own values. Jeff and Celis choose to stay within the all-female society but Ellador wants to learn more about the world and convinces Jeff to take her and explore.  Despite Van making his best efforts to explain the rest of the male-led world, there are are still many aspects that Ellador finds are to accept.

There are many positive aspects in this novel and it was much more readable than Moving the Mountain, having read more like a piece of fiction with philosophical and politic aspects rather than just an essay with a loose storyline. I appreciate some of the views the author had on how to run a society, especially her views on animals and equality. However, being a mother is still the main aim and purpose for a woman in this novel. So for all the advanced ideas that Ms. Perkins had she still missed the mark on that one. I mean, she does admit that motherhood is not for everyone yet motherhood and children are practically the religion of this society of women. She also has a clear stance on abortion and the use of negative eugenics that I don’t particularly care for. This book, however, is still poignant at pointing out the faults within the patriarchal society that is still relevant today.

I enjoyed how Jeff and Van came to undo the preconceived notions about women and how they progressed to mutual respect, love, and admiration for the women in this society and how their relationships developed. While Jeff and Celis’ relationship was not as successful as Van and Ellador’s, Terry’s hostile reactions and mistreatment of Alima was predictable and showed how damaging some patriarchal beliefs are to men’s sense of self and entitlement. Overall, this is still an important and essential feminist read.

One thought on “Herland by Charlotte Perkins Gilman”