This book has a lot of battles and fighting, which if you’re a big fan of reading Salvatore’s battle scenes, is a major plus. 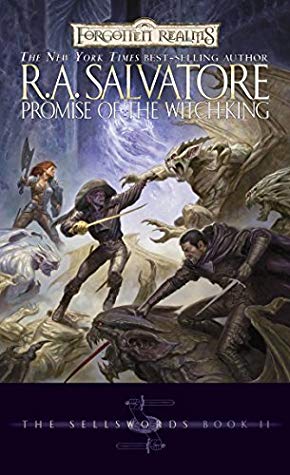 This is the second book in The Sellswords’ Trilogy featuring the adventures of Artemis Entreri and Jarlaxle as they search for artefacts from the notorious and terrible Witch-King Zhengyi, seemingly under the request of their alluring dragon patrons. New characters are introduced and new partnerships (friendships?) are made within a new and dark landscape. All the while the pair work to meet their own gains, usually from one of Jarlaxle’s elaborate schemes, that he doesn’t fully reveal to Artemis until the end.

I am heavily disappointed in this trilogy so far. The characters of Artemis and Jarlaxle seem much more developed and intriguing within the stories of Drizzt than in this trilogy of their own adventures. Jarlaxle and Artemis are the supposed bad guys and their characters are meant to be a refreshing change from the goodness of Drizzt. Somehow the adventures of these two should have lent itself to a more enticing story but instead, it’s falling flat. The formula for this book is that same as the first book in the trilogy, in which the two of them partake in some crazy scheme that Jarlaxle has come up with, that puts them, and others in great peril, for their own gains. Well, mostly Jarlaxle’s actually. Artemis starts to explore his own motives within this most book, making for the most interesting part of the story that’s isn’t touched on enough. Despite all that, it’s obvious that Artemis and Jarlaxle have a friendship or at least an amicable partnership, that they’re reluctant to part from and have some sense of messed up loyalty to each other that works with their morals and life choices.

This book has a lot of battles and fighting, which if you’re a big fan of reading Salvatore’s battle scenes, is a major plus. However, if you’ve fallen in love with Salvatore’s books for his character work, this book, or trilogy may not be for you. I will continue with the last book in this trilogy and hope that the final instalment turns the trilogy around for me.