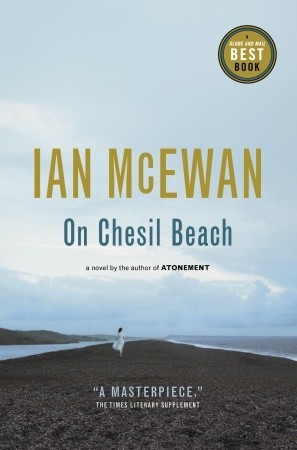 Confession; This is my first read by Ian McEwan and I think that this novel was a great introduction to his writing. I look forward to adding a few more of his books to my TBR pile.

This is a deeply emotional novel of the marriage of a young couple in the early 1960s. Florence comes from a well-to-do family and is a brilliant violinist who hopes of pursuing a musician as a career. She is recently married to Edward, a historian, of whom she met by chance at university. The two of them maintain this image of a perfect relationship and are looking forward to the next step in their lives after marriage. The novel opens with the two of them on their honeymoon right after their wedding. While the world is slowly starting to emerge into the swinging sixties, Florence and Edward, are still generally conservative, meaning that they have yet to become sexually intimate. Edward is beyond excited to consummate their marriage but is extremely worried about his performance and is wracked with anxiety. Florence, on the other hand, is terrified. She has no desire to be intimate with anyone and has been frigid throughout their whole relationship. However, Florence’s behaviour is not created out of modesty or disgust as Florence has a secret trauma she cannot bring herself to deal with. The story is a slow burner with the climax (no pun intended) during the moment the two of them attempt to consummate their marriage. The couple’s lack of communication and utter embarrassment about the whole ordeal leads to tragic consequences for both of them.

As a reader, you want desperately to shake Florence and Edward and get them to actually discuss their feelings instead of hiding behind this facade that each of them has created. Florence and Edward’s story addresses human vulnerabilities and the extremes that we go to in order to maintain an appearance and not show our deepest selves and secrets, especially when it comes to sex. As a reader, you connect deeply with this newlywed couple as many of us have experienced similar issues with vulnerability and communication and you really want the best for them. Both Florence and Edward had an idea of what they thought might make them happy but their inability to communicate their fears resulted in their demise and their whole lives changed within an instant. You can almost feel the deep regret oozing from the pages by the end of the novel.

This is a moving novel on a difficult topic that the author masterfully executed. I would recommend this novel for anyone interested in literary fiction or stories about intimate relationships.