“Love is the longing for the half of ourselves we have lost.” 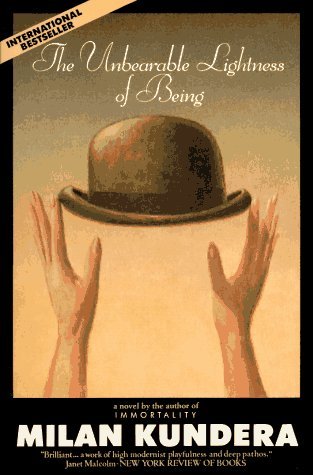 Readers of this book either love it or hate and I would say that both opinions would be valid. The book covers a large scope of history specific to Czechoslovakia with manipulative, provocative, and dynamic characters. The majority of the book is set in Prague, Czechoslovakia in the 1960s and 1970s and specifically during a time of political reform called the Prague Spring. Milan Kundera, the author, is of Czech origin but has lived in exile in France since 1971, where he became a naturalised citizen in 1981. Milan’s books were banned under the communist rule in Czechoslovakia and remained banned until the Velvet Revolution in 1989. Readers have speculated if any of the characters in this book and many of Milan’s others are in any way autobiographical, to which Milan responded in a 1985 interview with New York Times,

“No character in my novels is a self-portrait, nor are any of my characters the portrait of a living person. I don’t like disguised autobiographies. I hate writers’ indiscretions.”

The Unbearable Lightness of Being follows the lives of two men, two women, and one dog and how their lives intertwine during the years of political upheaval in Czechoslovakia. Tomas is a womanizing surgeon who marries the young and vulnerable Tereza, despite his inability (unwillingness) to be faithful. He claims to love Tereza more than anything but cannot give up seeing other women and battles his feelings for Tereza through the entire novel. Tomas even taunts her in her sleep by whispering in her ear his infidelities which causes Tereza to have horrendous and violent dreams about him with other women. Tereza is miserable and mad with jealousy but the two of them just can’t seem to be apart. The two of them have a delightful dog named Karenin who adores Tereza. One of Toma’s long-time lovers, Sabina has a similar nature to Tomas in how she treats her lovers but she has a turbulent history of her own that has made her that way. Franz is one of her lovers.  Each of the characters works their way through their turbulent relationships and personal faults as the country fills with the uproar of communism.

This prose of this book is undeniably poetic and beautiful giving it redeeming qualities long past its intriguing story, though not every reader has felt that way.

“The heaviest of burdens crushes us, we sink beneath it, it pins us to the ground. But in love poetry of every age, the woman longs to be weighed down by the man’s body.The heaviest of burdens is therefore simultaneously an image of life’s most intense fulfillment. The heavier the burden, the closer our lives come to the earth, the more real and truthful they become. Conversely, the absolute absence of burden causes man to be lighter than air, to soar into heights, take leave of the earth and his earthly being, and become only half real, his movements as free as they are insignificant. What then shall we choose? Weight or lightness?”

Many find Milan’s writing dry and dull, while others, myself included, find it to be brilliant. As I opened this review, readers either love or hate this book because is like an invitation into this place of history and into the lives of these people and if you’re not interested in either from the beginning the book will do little for you. The depth at which Milan exposes his characters is rich and at times unnervingly honest. He discusses love and personal faults in a way most would not find romantic but at least poetic and realistic, giving the topics their own unique sense of beauty and awe. Toma’s is not good to Tereza with his womanising ways but as the backstory on each character grows you find fault with each character and see how they tend to create their own dynamic miseries making you empathise with them all on one way or another.

I would recommend this book for those that enjoy literary fiction, history and historical fiction, philosophical or poetic prose (especially if you enjoyed Proust) or honest and flawed characters.