This is a trainwreck of an upbringing that you can’t help but sympathize with, as you berate yourself for laughing at the strangeness of it all. 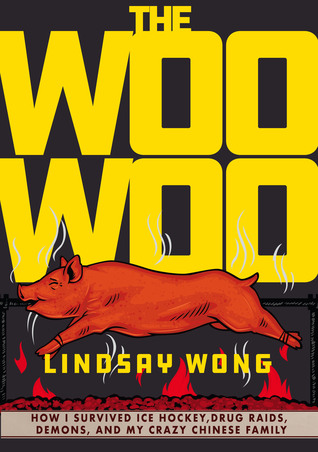 Lindsay Wong describes the Woo-Woo as a Chinese superstition that ghosts are the cause of bad things in your life, which unfortunately for her and mental-health-ridden family, meant an array of irrational behaviour followed by never seeking treatment. This book is in the Canada Reads 2019 shortlist after a few near misses in previous years so no doubt this book will be a fan favourite for the debates.

Lindsay and her siblings are first generation Chinese-Canadians. Her family came over from Hong Kong and settled in Vancouver which has a large Chinese population giving the city the appropriate nickname of Hongcouver. She lives in an upper-middle-class neighbourhood with her mother father, brother and sister, and for a short time her grandmother. Lindsay basis of daily dealings with her family and her life included things like swearing, name-calling, bribes with money, escaping life decisions and people with makeshift camping trips, and smothering bad feelings and “ghosts” with junk-food. Shouting matches, arguments, grudges and personal hang-ups are what Lindsay thought being a family was all about.

Despite her family having a comfortable income Lindsay wore old, dated clothes and showered once a week. Lindsay lacked the social skills to make friends but her aggression made her an excellent hockey player, an endeavour her father bribed her into to achieve some sort of Canadian-dream status.  Her father insisted that she was extremely stupid and fat as some messed up means of motivating her to achieve more along with a sick sense of dark humour. While her mother fell prey to the mental illness that plagued her own mother resulting in her being obsessed with ghosts and trying to protect her family from them. Her protection came in the form of insisting that her family never show any emotion as to not invite the ghosts in, terrorizing midnight wakings, lighting Lindsay’s feet and bedding on fire, day-long walks in shopping malls, and more.

Lindsay grew up in fear the Woo-Woo as she saw it slowly wreck her grandmother, her mother and eventually even her Aunt, whom she thought was safe. Without the means to empathize and deal with normal human situations in a healthy manner, Lindsay was in constant worry about her own mental state. Despite all this Lindsay managed to get into a university far from home where she was relieved to finally escape her family, only to find that the Woo-Woo seemed to have followed her there.

Even with these enormous hurdles to overcome, Lindsay seems to have found peace and understanding with her upbringing. Despite the dark and sometimes traumatizing events that Lindsay endured she approaches her story with a stoic and entertaining sense of dark humour. This is a trainwreck of an upbringing that you can’t help but sympathize with, as you berate yourself for laughing at the strangeness of it all. It brings awareness to the stigmas around mental illness and the barriers we still have to overcome, especially culturally, which healthcare systems could benefit from learning more about.

If you live in Vancouver, I would absolutely say this is a must-read. This is also a relevant book for those looking from some reprieve from their own families and mental health struggles.

The most moving part of this story comes from Lindsay finding the courage to write such an intimate memoir about her family, especially since she is writing from a standpoint of success in battling her inner Woo-Woo and family troubles. It’s a testament to the power of healing yourself and finding faith in yourself against the odds.

4 thoughts on “The Woo-Woo by Lindsay Wong”