“It is very hard for evil to take hold of the unconsenting soul.” 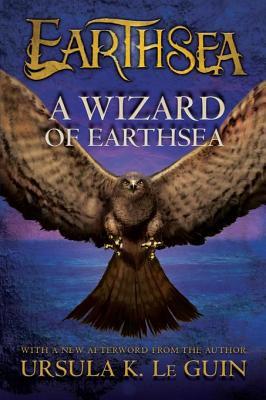 Published in 1968, this novel is one of Ursula K. Le Guin first ventures into children’s literature. She never intended to write children’s literature but thanks to her persuasive publisher this classic fantasy piece exists. Ursula was not only a pioneer in fantasy and science fiction but she also managed to create accessible and YA novels that were also pieces of literature.  I’m not sure how this author went under my radar as she is a highly acclaimed author but I’m glad I’ve found her.

This story the classic coming-of-age story of a young wizard named Ged. Ged has a natural talent for magic which is what gets him away from his poor upbringing and into a prestigious school to hone his magical skills. However, Ged is overly confident and he makes a mistake that will affect him for the rest of his life. After learning the hard way the cost of power, Ged must find a way to deal with the Shadow that he has released upon the world and come to realize that you are defined not by your mistakes but how your rise to overcome and learn from them.

“You thought, as a boy, that a mage is one who can do anything. So I thought, once. So did we all. And the truth is that as a man’s real power grows and his knowledge widens, ever the way he can follow grows narrower: until at last he chooses nothing, but does only and wholly what he must do.”

Ged’s trials are what makes this book timeless as the message the story provides to youth is essential, especially when the majority of kids are terrified of making mistakes. The book also emphasizes kinship and friendship with others and with animals and the choices it takes to be brave. That, and what kid doesn’t want to read about winning over dragons and beating their own shadows? This book is exciting enough to appease any youth reader and insightful enough to satisfy any teacher or parent. In a way, I am surprised that this series doesn’t have more a cult following as I imagined it reading like the Harry Potter of its day.

What is also pivotal in this book, especially considering its date of publication is the colour of Ged’s skin. Ged is described as dark-skinned and is not Caucasian, despite the cover art on most of the earlier published books. Imagine the ethnic minority readers this would have spoken to in the late 60s, and even today, who might have never had a character to admire or look up before that looked like them. Ursula became known for pushing boundaries on gender, race, environmentalism and more in some of her other works adding that exceptional element of brilliance to her writing.

While I have heard that this novel isn’t necessarily Ursula’s best work it laid the foundation for a phenomenal series and I know for me, it has made me want to read her more well-known adult novels and series. I would highly recommend that this book and its series be added as an essential to any fantasy-readers list and for those that love YA. This book is perfect for almost all ages making it a great book to re aloud to children or for those kids reading on their own.

3 thoughts on “A Wizard of Earthsea by Ursula K. Le Guin”