Will Drizzt act on his building jealousy? Where will this path of revenge lead him? 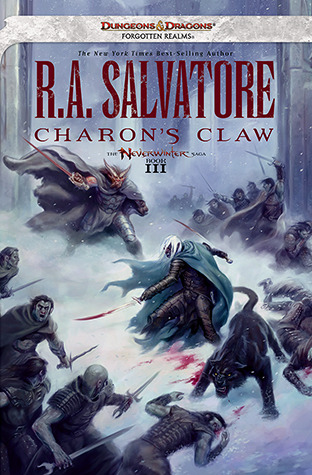 In anticipation of the newest release the in Legend of Drizzt series, I have been trying to make a bit of progress through this immense series. If I am honest though, I don’t really want to catch up. This series has always been a reliable go-to easy and enjoyable read that has almost always gotten me out of book slumps. While the last book in this series, Neverwinter I found a bit lacklustre, this book helped revive the story a bit.

Drizzt is still following his lover, Dahlia, on her path for revenge against the Netherese lord Herzgo Alegni. This is not typical behaviour for Drizzt as he has often followed a path of righteousness, or at least he did with his old companions. As in Neverwinter, you get to see a darker side to Drizzt that wasn’t present in the previous novels. Drizzt does not feel the same remorse while killing and he finds himself feeling something he has never felt before: jealousy. Dahlia and Drizzt’s frenemy Artemis have a connection and an understanding of suffering that he cannot relate to. A suffering that has lead the two of them to questionable lives, in Drizzt’s opinion, but is also drawing them closer together. Dahlia seems a little too concerned about the impending end of Artemis as the journey to kill Herzgo and destroy the sword that has enslaved Artemis well past his human lifespan. Will Drizzt act on his building jealousy? Where will this path of revenge lead him?

It’s kind of nice to see Drizzt have a few faults. I mean, the elf is damn near perfect otherwise and the darker themes lend well to developing his character. Do I like Dahlia? Not particularly. Do I feel bad for her awful childhood? Yes. Artemis, I have always had a thing for as he mirrors the other side of Drizzt. Unfortunately, there are a lot of side characters in this book that I don’t care for that convolute the plot, a problem I also had with this book’s predecessor. I am still, however, looking forward to the final book in this four-part series and will continue to follow Drizzt until the end of the total series in which I am still about 10 books behind in.