“Perhaps it is better to wake up after all, even to suffer, rather than to remain a dupe to illusions all one’s life.” 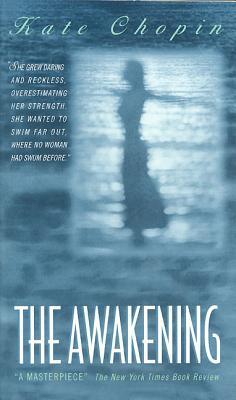 It is hard to imagine a book considered so scandalous that is was banned for decades; this book, Chopin’s masterpiece, did just that. It was published in 1899 and from then on it has struggled to get away from the banned book realm even though it’s included on most essential feminist reading lists. Chopin is considered one of the author’s that helped in ushering 20th-century American feminism.

This Victorian novel gives a shockingly honest account of identity and infidelity from a woman’s perspective. The protagonist is trapped in a stifling marriage. She has fulfilled the role that society has put in place for her but she realizes that the life she is living is not truly her own. Following her passions, she takes in a lover and begins to make her own choices about what she wants to do with her life in accepting herself as she truly is. She begins to question how women seem to ‘belong’ to men rather than to themselves. She even distances herself from her own children as her insights begin to weigh on her further.

“…but whatever came, she had resolved never again to belong to another than herself.”

The popularity of this novel comes not from its relevance in the history of feminism but the fact that many women can still relate to the protagonist, to a smaller extent, when it comes to themselves and the choices they have to make as women. Spoilers ahead… The main controversy today comes with how the protagonist ultimately abandons her children, a choice unforgivable to nearly any modern mother. However, taken from within in context, the protagonist was never given a choice about having children. She had to. She was married, there was no birth control and it was expected of her that she would be a mother as that is the only thing of value given to women in that timeframe. The protagonist may be rich, coddled and spoiled but she does love her children. The problem is that she feels she was never given a choice in the matter when it came to becoming their mother.  Does that mean she gets to revoke her responsibilities as a mother? No, but she did anyway. This brutal honesty is what continues to make this novel so scandalous.

Readers have attacked the protagonist for her selfishness and her inability to stand on her own two feet despite the choices she eventually makes. All valid. I don’t disagree but again, what makes the book so potent is that the protagonist’s feelings are not unique, in that women all over the world know to some extent what is or what it might feel like to be in her shoes even if they would never make the same choices. Spoilers ahead… The protagonist’s demise is tragic, as her turmoil is so intense that she believed suicide was the only option for her. Suicide, with its intentions, is not in and of itself a selfish act as sufferers do believe that they are doing the world and their loved ones a favour in making the choice to relieve their suffering. The dynamic between empathy, shock, disbelief or disagreement as well as tragedy, whether for the protagonist, her children or both, are what continue to make this book so exceptional. Accompanied by Chopin’s eloquent writing, it’s no surprise the impact this novel continues to have.

“But the beginning of things, of a world especially, is necessarily vague, chaotic, and exceedingly disturbing. How few of us ever emerge from such beginning! How many souls perish in its tumult! The voice of the sea is seductive; never ceasing, whispering, clamouring, murmuring, inviting the soul to wander for a spell in abysses of solitude; to lose itself in mazes of inward contemplation. The voice of the sea speaks to the soul. The touch of the sea is sensuous, enfolding the body in its soft, close embrace.”