AKA James Frey… the twat. 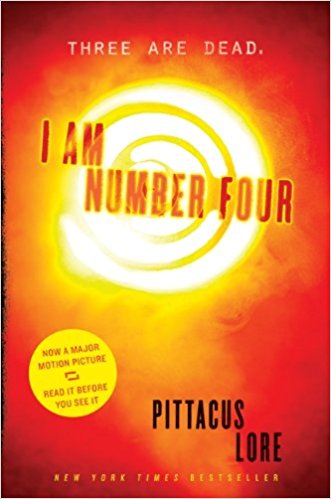 This book was a reluctant read. I received this book as a gift and it had been sitting on my shelf for a few years. I picked it up when I was in a reading slump and it left no surprises, this is book was exactly as I thought it would be. I can’t say I hated it as much as others but I can’t sing its praises either.

The remaining Loriens are hiding away on planet Earth after their own was destroyed by the Mogadorians. John Smith, not his real name, is one of these remaining Lorien. He is number four out of nine Lorien’s with legacy powers. They are protected by a charm that will keep them alive as long as they stay apart from each other, though it can be broken if they are killed the corresponding order. Despite the Lorien’s efforts in hiding, the Mogdorians are on a death mission to hunt them down and number three has just died, meaning that John is next. John’s sci-fi story in intermingled with an attempt to appear and lead a normal human life as he and his guardian Henry, move from town to town trying to stay safe.  John falls for the most cliche high school girl, Sarah, and as his powers develop has to learn to keep them under control and not bring attention to himself. Even if the lame high school jock is bullying his friend and pestering his new love interest, which of course John can’t resist and makes a bunch of bad decisions going forward.

The story felt flat and the characters were massively stereotypical, especially Sarah. It’s so bad it is near degrading in a way. She was a cheerleader who dated the main jock and bully in the school but magically gave it all up to pursue photography and now she is just a nice person who falls in love with alien and needs to be saved and protected. It is just such a shallow and very male-centric way to describe her and didn’t feel necessary.  On top of that, the writing quality is poor. To take an ounce of enjoyment out of this novel you have to find a way to get past that.

Also if you know anything about who this Pittacus Lore guy is, you might feel less inclined to read anything by him. Pittacus Lore is a collective pen name for James Frey, Jobie Hughes, and Greg Boose. While you may not recognize the last two names, you likely recognize infamous liar and businessman, James Frey. Jame wrote a ‘memoir’ about his struggles with drugs and alcohol. quite a few years back. There was massive controversy surrounding the book as it came out in an interview with Oprah, that not all of it was true. Frey has since gone on to create a publishing factory of shitty writing by hiring a bunch of ambitious writers by luring them with the promise of success and fame. This book and the following series is a result of one his business efforts.  You can read more in-depth about it in New York Books.  Frey seems very comfortable with his shady writing methods, provide it brings him fame and fortune, which of course it has.

If you consider all this together it is all pretty off-putting, but many readers are not interested in Frey’s misfit writing endeavours and just want a cool story, which is ultimately what keeps Frey’s success going. I for one, don’t care enough about this mediocre novel to pursue it further and would not recommend that any read or support the man behind it.