A biologist tries his hand at anthropology and does a pretty decent job. 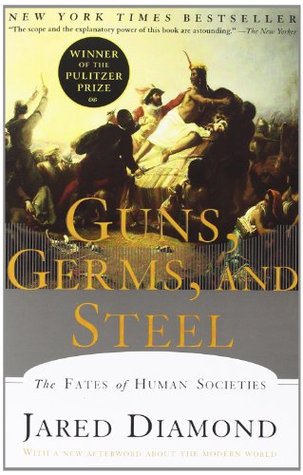 I honestly did not know that this book was published in 1997. I remember working at Chapters in 2005 and this book being very popular so I assumed that it was published at that time. Little did I know that this book created such a wave that it became a basis and main theory contender for how humans developed in countries all over the world. What is even weirder is that Diamond is not even an anthropologist, he is a biologist! After spending 30 years of his career in New Guinea he wanted to answer one of the biggest questions in anthropology: Why did some areas of the world develop more than others?

“Why you white men have so much cargo [i.e., steel tools and other products of civilization] and we New Guineans have so little?”

Diamond’s basic argument is that farming and agriculture enabled some areas to develop faster than others as the lands native and natural vegetation and species adapted and took well to domestication, like the Fertile Crescent. The abundance of easily available and mass-produced native vegetation allowed for the expansion of a population which then leads to more innovations and progressions. Some areas of the globe, like New Guinea, did not have the land, space, population or resources to introduce farming and agriculture making it an unstainable move away from a hunter-gatherer lifestyle.  Hunter-gatherers have to put all their time and energy into attaining food, leaving little time for other innovations and developments.  Hunting and gathering is no easy feat either. It requires a lot of specific skills and knowledge and within that other types of innovations are made. Diamond goes into detailed examples of the progression of human history in a variety of areas around the globe as well as the spread of contagion, military developments and the invention and use of writing and its effects.

Diamond’s arguments and examples are solid and I was intrigued for the first half of the novel but sadly, towards the end, I was found the content a bit dry, regardless of the facts he was presenting and their importance. I suppose it is because I read this novel 21 years after its initial publication in which, Diamond’s ideas and arguments already seem so commonplace, but I imagine when his book was first published it would have been quite revolutionary.

I do not know how Diamond’s works hold up in the current anthropological environment but the book is still an important one to consider reading. Especially if you have ever asked yourself the same question Diamond did, which I would say is one of the most important questions of human history. Diamond’s intention was to show a scientific and anti-racist approach to some of the ‘whys’ of our human history. I believe he succeeded in that.

“In short, Europe’s colonization of Africa had nothing to do with differences between European and African peoples themselves, as white racists assume. Rather, it was due to accidents of geography and biogeography—in particular, to the continents’ different areas, axes, and suites of wild plant and animal species. That is, the different historical trajectories of Africa and Europe stem ultimately from differences in real estate.”