This book is violent. You have been warned. 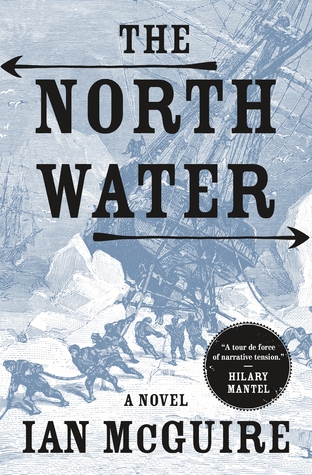 “Henry Drax is either dead or he’s in Canada, which if you ask me is near enough the same thing.” p. 199 (Just one of the many fantastic lines in the book)

This book was another one that got my attention off Goodreads. I patiently tried to wait for my library to get a copy but it didn’t happen so I caved and bought an ebook copy; it ended up being a very worthwhile purchase. This historical-fiction not only has a riveting and gruesome plot, it also spares no details in how the men on whaling were really like. Some of the characters are likeable, commendable even, while others are down right disgusting.

It is the 19th century and people still rely on whale blubber for many of their everyday resources. The whaling ship, the Volunteer, is about to head out towards the Arctic on an expedition that will end up becoming its last. To say these expeditions were brutal is an understatement. However, life aboard with the nasty Henry Drax makes a brutal expedition go foul. Drax is a thief, a cheat, a rapist and a murder and will do whatever he needs to get ahead. Also aboard is an ex-army surgeon named Patrick Sumner, who has shady past that he will not discuss. As it is his first time aboard a whaling ship, the crew wonder why someone of his standing would want to work such a crude job. Having discovered a horrible crime that Drax has committed, Sumner does what he can to make sure that he sees justice. Drax however has his own devious plan in mind. When the whole crew gets stranded it becomes apparent that not everyone will live to see the winter.

This book is as close as you are going to get to the savage and filthy environment of a whaling ship. Disease, dirty, horrible smells and a lot of grueling hard work. However, if you do not like violence, especially against women or children, or anything to do with rape then I would not read this book. This is probably the most violent book I have ever read. Having said that, the author is talented enough to keep it subtle and let your imagination do the rest, which is exactly the kind of adventure story I love. If Moby Dick had been more like this I can assure you every high school/university student would have loved it; more gore and less whale anatomy.

“He is not ashamed of what he has been or done: a man makes his mistakes, he tells them, a man suffers as he must suffer, but the readiness is all.”

As much as I despised Henry Drax, he sure made the book interesting.  The writing style suited the characters and the plot was brilliantly delivered. In all honesty, this is one of the best adventure novels I have read in years and if you have the stomach for it, I would highly recommend it to anyone who enjoys history and adventure.