Informative but also insightful, this book is a great place to get the basics of Buddhism and how to apply his teachings in your everyday life. 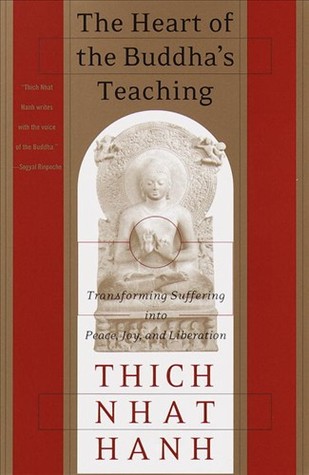 Informative but also insightful, this book is a great place to get the basics of Buddhism and how to apply his teachings in your everyday life.

Out of mere curiosity, I wanted to learn some of the basics of Buddhism since I’m living in Asia. After a few Google searches, this book kept coming up to I decided to snag it from my local library.

Thich Nhat Hanh is a Vietnamese monk who joined the monastery at the age of sixteen. He currently resides in France and is a very active writer and spokesperson for Buddhism. He is often considered one of the most influential Buddhists of our time.

What I learned from this book is that there is more than one sect of Buddhism:

Here’s a run down of the basics of Buddhism, in which is common to all of areas Buddhism.

1. The truth of suffering (dukkha)

2. The truth of the cause of suffering (samudaya)

3. The truth of the end of suffering (nirhodha)

4. The truth of the path that frees us from suffering (magga)

The Third Noble Truth, the truth of the end of suffering, has dual meaning, suggesting either the end of suffering in this life, on earth, or in the spiritual life, through achieving Nirvana. When one has achieved Nirvana, which is a transcendent state free from suffering and our worldly cycle of birth and rebirth, spiritual enlightenment has been reached. The Fourth Noble truth charts the method for attaining the end of suffering, known to Buddhists as the Noble Eightfold Path.

The Eightfold Path, as well as Right Understanding, Right Thought, Right Speech, Right Action, Right Livelihood, Right Effort, Right Mindfulness and Right Concentration are were things start to get a bit complicated, but there are three themes in which the path is divided into: good moral conduct (Understanding, Thought, Speech); meditation and mental development (Action, Livelihood, Effort), and wisdom or insight (Mindfulness and Concentration).

They also often believe in not harming any sort of life, which means that a lot of Buddhists are vegetarians, as well as the belief in karma and reincarnation are a few other basics. Many monks have restrictive diets in that they only eat food that has been offered to them.

Not only did I find this book really informative, I also connected with it on a spiritual level. The idea that there is an acceptance of suffering and that it’s part of what helps us appreciate the better things in life as well as the use of mindfulness are the areas that really spoke to me. However they have one rule regarding hate, in which you’re not to intentionally expose yourself to it in any form, including music, books and video which I struggle with. I understand why in a way, but I could never give up heavy metal or certain books, they make me feel blissful even if the content is occasionally hateful. I mean, come on, moshing has a purpose if it makes you feel good, right? I would argue that it relates to the suffering noble truth and that these media pieces are just a reflection of them.

As with all religions, there are aspects of the book the get complicated, or rather overwhelming with doctrine, though it thankfully never got preachy. I wouldn’t have read the book if I thought at all that there was an attempt from the author to convert me. The more the book started to delve into more complicated aspects of the religion as well as setting out a few rules, I knew that the monk life was not for me. However there are some very helpful ways that Buddhism suggests in dealing and healing with the ins and outs of life, which really is the purpose of most religions.

Overall if you have interest in Buddhism or are looking for a little inspiration in your life, this book is a good place to start.