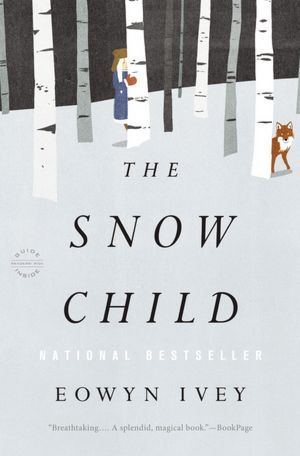 This book came as a recommendation from my mom, meaning that this book could go one way or the other for me. The last two books she recommended to me I was completely split on. One of them was Outlander, which I was not keen on, and the other was The Unlikely Pilgrimage of Harold Fry, which I thoroughly enjoyed. Thankfully, this one was absolutely worth reading.

The Snow Child is set in Alaska in the 1920’s where, Jack and Mabel have recently decided to make a fresh start at life. They are an older couple and they are childless. Mabel desperately wanted a child but was unable to and now, what they thought was going to be their fresh start, is slowing tearing them apart. Jack is worn out by the constant demand of the farm and living in Alaska while Mabel is tortured with loneliness and despair. During one brief, and long overdue glimpse of happiness, Jack and Mabel build a child out of snow during the first snowfall of the season. When the next morning comes the look out to see that their snow child has some how disappeared. Yet starting that day, both of them glimpse a small blond haired girl in the forest that they have not seen before.

Slowly, this girl begins to present herself more frequently. Jack and Mabel finally learn that her name is Faina and that she hunts with a red fox at her side. Who is this child that has stepped into Jack and Mabel’s life as if from a fairytale? Once spring begins to make its appearance, Faina disappears until the first snow fall of the next winter. Jack and Mabel await every winter anxiously as they have come to love Faina as the daughter that they never had. While Mabel believes that Faina is something magical, Jack tends to believe a different and more practical story based on some secrets that Faina has shared with him. What neither of them know is just how much Faina has affected their lives and what awaits them.

What made me almost cry in this book was the hardship and love between Jack and Mabel. They have trouble communicating and each of them is struggling in their own way, yet they don’t know how to reach out to each other. They learn so much about each other in Alaska and you’re able to watch them get over so many hurdles. I suppose that my emotions may have also been affected by my circumstances at the time of reading this book, as I was in the process of moving out of my home country to meet my boyfriend who I had not seen in almost a month and a half.

One complaint that some readers have made is that some of them found the story a bit cheesy, which I suppose I could understand. However, this isn’t a perfect teenage love story, this is about an older couple going through some very real turmoil, which is something that anyone in a long term adult relationship can relate to. I mean, I’m the first to say that I really dislike it when a good plot is ruined by a superficial love story and this book didn’t do for me; I enjoyed the developments in Jack and Mabel’s relationship.

What’s interesting is that there really is a legit Russian folklore story called The Snow Child, though I won’t reveal how the different endings go in this folk story as to not spoil this book.

This book will have a massive appeal to anyone that has had fertility issues as well. Mabel reveals the struggles she has with infertility and the devastating sorrow that it’s caused her. The book is a consolation to anyone that knows exactly how she feels.

Overall this novel ended up being a book I really enjoyed. I feel that author did a very good job doing justice to the characters, plot, historical setting, and romance in this book and I would recommend this book to anyone that wants a feel-good read.

One thought on “The Snow Child by Eowyn Ivey”