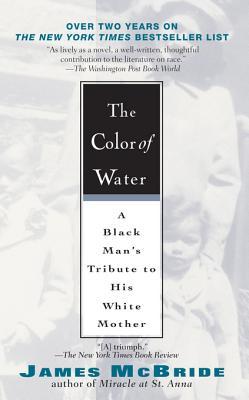 James McBride grew up as a young poor black boy, with 11 siblings and a white mother. To be honest, that sentence right there is probably enough to sum up with this book. I picked up this novel for a book club that I sadly never had the chance to attend due to moving out of the country. While the book discusses some interesting aspects of race and belonging, I found it to be an uninspiring memoir.

Jame’s mother was born and raised Jewish and moved to America in her youth. Her father is a rabbi but there is nothing holy about him. He is a savage who beats his crippled wife relentlessly and molests his daughter. Jame’s mother would go on to marry a black man, thus being disowned from her own family. These events also took place in a time where interracial marriage was extremely frowned upon. Jame’s mother loses her first husband, and ends up remarrying another black man and in the end has 12 children to raise. The family is outcast and frowned upon. Jame’s recounts his mother’s tale through short snippets that she provides and goes on to tell how he and his siblings managed to overcome the challenges of their upbringing and the circumstances surrounding it.

This book is apparently supposed to be a tribute to Jame’s mother but the information isn’t all that consistent as he had to string the story together over small pieces of information that she shared.  Additionally, she doesn’t appear to do anything inspirational for her children, in that all of the important questions that they had about who they are and where they fit in she refused to discuss or acknowledge. Not that it’s my place to judge that, it just didn’t make for that interesting of a memoir . She didn’t acknowledge to her own children that she was white, when her children clearly knew that their mother was different from the other black children’s mothers, just as they were different from the other kids.  James and his siblings had to speculate and be miserable about their own identities all on their own. Philosophically speaking, you could say that that it wasn’t important for Jame’s mother to discuss any of their differences, but as humans, we all want to fit in somewhere and so the children’s identity crisis’s were completely understandable.

I think that they way James and his siblings were raised is a reflection of the time period and the only option that their mother had in raising that many children, but again it’s not really up to me to judge that aspect, I just found that it didn’t make for a inspiring or riveting memoir. While many of Jame’s siblings ended up being successful, himself included, they initially struggled as adults. They got involved with drugs, had run-ins with the law, and had a lot of random children of their own. While I imagine the choices and life that Jame’s mother made were not easy and she is remarkable in that right it appeared that her children’s successes were due to their own resilience.

James also seems to spend a lot of time talking about his own achievements as a musician and a writer making some sections of the book sound like his personal resume. The writing style is clunky and unfeeling. The praise for this book, I believe comes more from the premise of the story and its content than the actual writing. The book discusses  and goes over what it was like for black and interracial families growing up but the way that James presents his story is not well executed. The man is a journalist by trade,  not a novel writer, and it’s apparent in the writing of his own story.

Overall, I didn’t understand that hype of this novel. It wasn’t bad but it definitely wasn’t great. I appreciate that Jame’s wrote the story of his difficult children and the struggles he and his mother went through but it just didn’t speak to me. Some memoirs are more for the person writing them then they are for audiences.