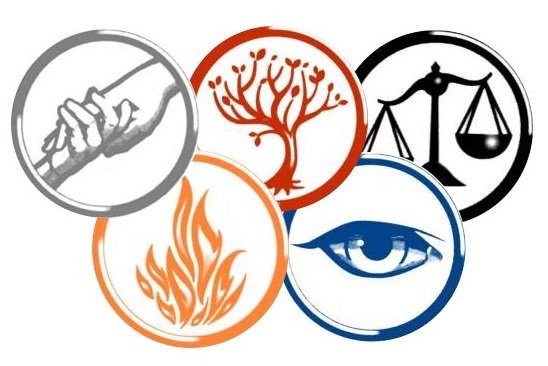 You know what, I’d say that this book is deserving of all of the hype and fame that it has received. Why you ask? Because this is one of the few YA novels that isn’t chalked full of a bunch of barfy teenage romance but instead focuses on the more interesting dystopian setting and all of its encompassing action!

Divergent is set in a dystopian version of Chicago in which everyone is separated in to five different factions that represent different ideals to create a whole and peaceful unit of government:

1) Abnegation; The Selfless: “I choose to turn away from my reflection, to rely not on myself but on my brothers and sisters, to project always outward until I disappear.”

3) Dauntless; The Brave: “We believe in ordinary acts of bravery, in the courage that drives one person to stand up for another… We believe in shouting for those who can only whisper, in defending those who cannot defend themselves.”

4) Amity; The Peaceful: “Give freely, trusting that you will be given what you need… Do not be angry. The opinions of others cannot damage you… The wrong is past. You must let it rest where it lies… You must no longer think cruel thoughts. Cruel thoughts lead to cruel words, and hurt you as much as they hurt their target.”

At sixteen, each teenager is given an aptitude test to see which faction they would be best suited to. While the test is often the best suggestion to which faction they should go to (often the same one they grew up in), each teenager has the free will to choose which faction they would like to go to. Each faction follows specific rules and ways of life. For example, the Abnegation faction is based on selflessness. They dress drab, as to never focus on themselves and believe in helping others. A quirk with this faction is that they don’t have mirrors. It is in the Abnegation factions where the main protagonist, Beatrice Prior grows up.

The Abnegation faction is not the most well liked faction as they are the ones that run the whole government, given their selflessness. The Erudites, believe that because they focus on knowledge that they should be apart of the government which has created a massive rivalry between the two factions. Beatrice never feels like she quite belongs in the Abnegation faction, she isn’t quite selfless enough, not like her brother. When Beatrice takes her aptitude test she isn’t quite sure what to expect. He assessor tells her that she is Divergent, a word she had never heard before, and warns her not to share this information with anyone for fear of her life. When it comes time to pick a faction she decides to go with the Dauntless faction, and her brother, shockingly to the Erudites. It is not often that teens will leave their faction and family.

Beatrice is thrown into the world of the Dauntless, the brave and the fearless. They sport tattoos and eccentric clothing which, is unlike anything that Beatrice has ever seen before. The first few tests with the faction force her to do some death-defying feats in which not all new initiates make. For those that survive and fail any of these feats, they are considered ‘factionless’ and are sent to live, homeless, outside of the city.

Making her way from an initiate to a full Dauntless member, Beatrice learns what it means to be Divergent and why it was so important to keep it a secret. She also unfolds a plot which will change and destroy the way of life for each an every faction.

The book spends most of the time within the Dauntless faction following Beatrice’s trials, which are action packed and intense. She fights and beats up boys, she has to constantly put herself in the face of danger and stand up for those that were not Dauntless-born, like herself. Granted, she does meet a love interest but that doesn’t really unfold until near the end of the book and up until that point you’re taken on a wild ride of adventure and awesomeness!

Unlike a lot of YA novels, the qualities that make Beatrice different from the rest of the characters are not necessarily a good thing or overly exceptional. As Beatrice is Divergent, she thinks differently and has harder choices to make than those who aren’t. Things are not cut out so nice and clear for her as they are for others. It also raises the question of the potential that perhaps everyone is capable of being Divergent if they were given the chance to think outside the box of what their faction and government restricts them to. What makes Beatrice remarkable and a great heroine are her choices to want to be something more and her ability to stand in the face of fear even though she is deeply afraid. While she ends up fully embodying the Dauntless creed: “…ordinary acts of bravery, in the courage that drives one person to stand up for another…” she ultimately represents every faction by being Divergent and shows that every person is able to display the qualities of each faction.

For those who are looking for a refreshing YA read and have been curious about the potential for this book I strongly encourage you to give Divergent a read!

2 thoughts on “Divergent by Veronica Roth”