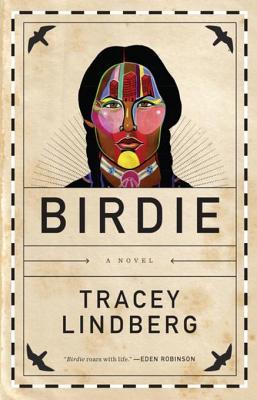 I know I’m writing this review a bit out of order as I have some books that I’ve read before this one that still need to be reviewed but I thought I should get the reviews done for the Canada Reads 2016 shortlist as soon as possible. That way I can try to have as many done as possible before the debate and final selection in March.

Admittedly, I picked up Birdie first as it is the shortest out of the 5 novels in this years shortlist. I knew nothing about the book or the author. I found out that this is Tracey Lindberg’s debut novel and that she is the first Aboriginal woman in Canada to complete her graduate law degree at Harvard. She also teaches Indigenous Law at two Universities in Canada.

Birdie, it’s the name her mother use to call her and name she associates with better days. Bernice is a young Cree woman, who has left her home in Northern Alberta to pursue a childish obsession to meet Pat Johns, who played Jesse on The Beachcombers. She has also left to discover the strange meaning of the dreams that she has been having that revolve around a popular cooking show. After finding work in a bakery in a small town in BC, this sort of vision quest that Bernice is partaking in comes with results that she does not expect as she revisits much of her very tragic and scarring past. When she falls into a catatonic state, either from mental illness or due to a vision quest, the supportive women of her past come to help her. From sexual abuse, her mother’s disappearance, to her time spent in a psychiatric ward and living on the streets, Bernice must overcome her past in order to start again.

The scenarios depicted in Birdie, sadly, are a reality for so many aboriginal women in Canada. Like Bernice’s mother, in the last 3 decades over 1,200 indigenous women have been reported missing or were murdered, and it’s an epidemic that’s been largely brushed under the rug. The reports of sexual abuse and violence in Aboriginal communities against children and women is also shocking, many of which go unreported and continue to perpetuate the cycle of abuse into the next generation.

“No one ever talked about a lot of things. What happened to Freda’s mom. Why Freda lived with everyone at one time or another. Why Maggie stopped talking to anyone. When the electricity would come back on. Why no one stayed with the uncles. The silence about what was happening around them seeped into the kitchen, first. Permeating the curtains. Eating into the linoleum. Eventually settling in the fridge. It was like some sort of bad medicine – it made Freda skinny, Bernice fat, and Maggie disappear.”

Besides the huge statement that Lindberg is making in telling the story Bernice and making more people aware of the problems still facing Aboriginal women, Birdie is beautifully written and highly poetic. Each chapter begins with a Cree words and a poem that depicts the dreams that Bernice is having. You are taken through her past in a similar dream-like fashion. However, this dream sequence style of writing lead a bit of confusion for me as a reader, as the plot line wasn’t linear. I was riveted with the first and last portions of the book but there was a small portion in the middle that lost me when I wasn’t able to sequence the events together. I also, some how managed to miss that Bernice was having a sort of vision quest and that the dreams she was having were going to add up to something at the end. Could be my bad as a reader, but it could also be the fault of the writer. Regardless, I found myself thinking about Bernice and her character days after reading this book, so Lindberg’s character work is impeccable.

The end of the novel is a massive reflection of starting over, making this book a very good contender for winning Canada Reads this year. This book is also a great recommendation for anyone who has or knows someone with mental illness as Bernice struggles with her own demons. There are some moderately graphic depictions of abuse in the novel however, so it may be challenging for those who can sadly relate to that. However, the ending more than makes up for it as Bernice learns to overcome her past.

One thought on “Birdie by Tracey Lindberg”