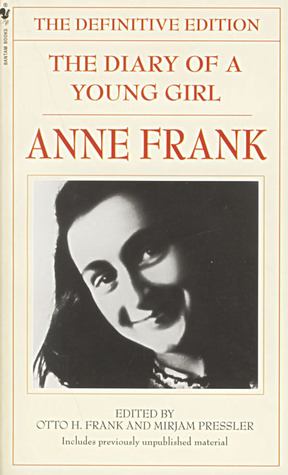 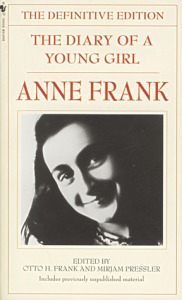 I read The Diary of a Young Girl, for the first time as an adult. Here is my throwback review:

Anne Frank happened to live in a devastating era. For 2 years, Anne and her family were hidden in away in a Secret Annexe in order to keep from being sent off  to concentration camps. Her diary is a depiction of this time. In so many ways, Anne is like a an ordinary teenager (though I don’t think teenagers these days write as well as her): Boys, struggles with her family, her self-image and explorations of her own sexuality, it just all happened to take place during the Holocaust. I can’t even imagine what it would be like to come of age during this time. I only wish that Anne had survived to further tell her story.

I’m thankful that I read this book as an adult because it allowed me to truly grasp how horrible Anne’s situation really was. If I read this as a teenager I might have connected and likely focused on her struggles with her parents and her craziness about boys rather than seeing the big picture of the scenario she had found herself in, as Anne often tried to focus on things that were not directly related to the sorrows of her family too much. In some ways, if taken out of context, the diary could just be that of a normal teenager to some extent. You almost forget to atrocities going on outside of Anne’s thoughts until she reminds the reader of her situation. Anne grows up so much through out the writing of this novel, in an almost tragic sense, and she realizes that. She comments on her nativity and realizes that she will never again be that innocent child. She even at one point finally acknowledges the cruelty she has displayed to her parents. I’m also glad I read the definitive edition and that the publisher added an introduction with an explanation of with how her father handled her diary as well as the tragic ending of most of the people in the Secret Annexe.

Speaking of the Secret Annexe, I can only  imagine the boredom! I felt claustrophobic just reading this diary! Not being able to go outside for almost 2 years?! Really, sit back and think about that for a second… They couldn’t go outside. No exercise. No sunshine or wind on their faces. They didn’t have a TV or anything like that. Just books and paper. I admire that Anne and many of the members were still committed to learning. It gave them hope that there was future and that they would continue on living. I also adore how headstrong Anne is. She always spoke her mind, voiced  her opinion and believed that women should be equal to men. A bold opinion in that day and age, especially for a teenager! I can imagine her, if she had lived, being a role-model and advocate to women’s rights and the survivors of the holocaust. I suppose her memory and the contribution of her diary does do this in so many ways. It’s just unfortunate that so many people like Anne were taken away from this world in such a cruel, unnecessary and horrific manner.

Another tragedy of this, is the extent that Anne distanced from her own family during this hard time. It sounds like each person in the Secret Annexe felt very alone. I suppose that it’s normal for a girl her age to want to distance herself but I can’t imagine how hard it was on her parents. The scene in which her mother is crying and sitting by her bed and says something about how Anne doesn’t love her broke my heart. Living in the Secret Annexe would have been inexorably hard; living in fear inside a cramped space without basic necessities sometimes and ultimately feeling alone and without comfort… it just makes me cringe. I also can’t imagine the inner turmoil they all must have felt too, as Anne describes at one point as well, about feeling miserable about their situation but knowing that they are still one of the lucky ones, as their friends and neighbours are killed and shipped off to concentration camps.

The people who assisted everyone in the Secret Annexe are remarkable human beings. The amount of times and the extent of how often they fell ill showed the extent of the massive amounts of stress that they dealt with trying to keep Anne and her family safe. Even at the risk of their own health and life, they still continued to protect the families in the Secret Annexe.

Overall, I’m thankful I found time to read this classic. It’s an important piece of literature that should never be forgotten.