Scout returns home to learn some final lessons from her father in the sequel To Kill A Mockingbird. 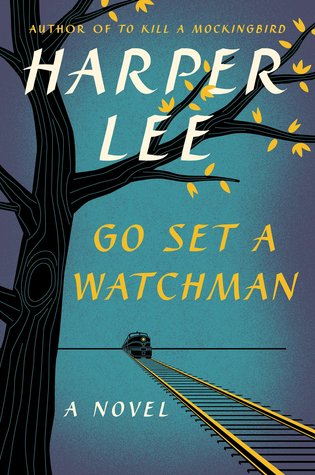 Scout returns home to learn some final lessons from her father in the sequel To Kill A Mockingbird. This book has been one of the most anticipated and talked about books of 2015, luckily for me, I was on the hold list at my local library for this on early! Harper Lee originally wrote this story first in 1957 and when she brought it to the publisher, they were more intrigued with the flashback scenes of Jean Louise’s childhood and encouraged her to write on that, and thus To Kill A Mockingbird was born. There has been a substantial amount of controversy surrounding the publication of this book as to whether or not Harper Lee really wanted it published. Regardless, the publishers made their money as this book  was one of the most pre-ordered books since Harry Potter and The Deathly Hallows. While this book has left many readers and fans frustrated with the outcome of certain characters, or even the lack there of with certain loved characters, many have decided to avoid the story all together to preserve their ideals and love of To Kill A Mockingbird (TKAMB) However, I’m here to tell you that this book is still worth the read.

Scout, or Jean Louise is now a young and vivacious woman and after living in New York for the last 2 years she returns home to visit her family. Jean Louise still has her fierce personality and while she looks like a proper young lady, she is still as brazen as ever. Jean Louise is nostalgic and has mixed feelings about returning to her home of Maycomb, Alabama. She wants to see her beloved and aging father, Atticus, but she is ambivalent about her love interest Hank, who was her brother Jem’s best friend. More importantly, she isn’t sure what to make of the town that she grew up in as she has come to see has small the town really is.  The more time she spends with her close-knit family and friends she comes to realize that the civil rights movement is causing tension in the town. What’s more troubling is that Atticus and Hank seem to have some involvement in it, yet she doesn’t know exactly how. As she investigates, Jean Louise will come see her father as a real person with flaws, rather than a man she idolizes.

This book didn’t change my opinion of TKAMB, but rather I feet that the two books compliment each other quite nicely. As a reader, like Jean Louise, you come to idolize Atticus in TKAMB for his strong moral compass and bravery, without seeing a single one of his flaws. Every child goes through a moment in their life when they start to see their parents as people, rather than just authoritative figures. This is what Go Set a Watchman is all about as you get to grow with Jean Louise for a second time. I can see however why this book would have aggravated major TKAMB fans. For one (I’m going to spoil this a bit, but not completely) Jem is not in the book and neither is Dill. Instead you have Hank, a character that was never discussed in TKAMB. Admittedly I did find their absence disappointing but it was short-lived. I think the biggest shockers come from Atticus and Calpurina as their behaviors at times contradict the characters that you came to love. Calpurina’s was the most heartbreaking for me as you don’t get the same amount of detail about her views and opinions. With Atticus though, while his beliefs are the most controversial in the book, I believe that he committed to the law and the belief of the greater good and that his actions are based off that.  That doesn’t mean I agree with him, but I  believe him to be a bigot.

That aside, the reason I’m not raving about this book is because sadly, this novel was not as concisely written. The flow of the novel didn’t feel natural and while the last portion of the book was exciting, it read less like a novel and more like a piece on philosophy on morality. While that isn’t necessarily a bad thing, it just didn’t fit well with the rest of the story. I can see why the publisher suggested that Harper Lee write TKAMB, as the flash backs in this novel were by far the highlights of the novel.

The motions and struggles that Jean Louise goes through makes this perfect for those in their twenties who have left home and are starting to make a new identity for themselves. If you are truly a TKAMB fan and have no desire to see the any of your beloved characters altered in any way then maybe this book isn’t for you, however, I believe that there are benefits to reading this book and that the character growth and the lessons that come with them are more important than holding onto any ideals.

One thought on “Go Set A Watchman by Harper Lee”