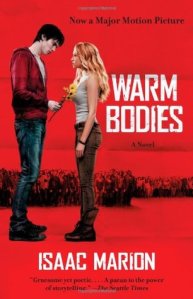 Throwback review to when I read Warm Bodies. Yes, the book is exceptional and better than the movie.

Confession: This is my first zombie related novel and if the rest of the zombie plotted books are like this one, then I need to read more.

I feared for the worst with that novel; that it would be cliché and that the plot would come off as ridiculous. I mean, really? A zombie romance? I thought to myself that there was no way that this could go well but Marion, happily, proved me wrong. The plot is gruesome, elegant and highly entertaining.

R is just zombie who is tired of his zombie life. He seems to process and think a bit more than his fellow zombie comrades. After saving a young woman named Julie, things begin to drastically change for R. His dead heart seems to start to feel again. Terrified Julie doesn’t know what to make of this strange zombie that is protecting her instead of eating her but the situation makes her reevaluate the outbreak and how the small groups of remaining humans are currently dealing with the zombie situation. Both Julie and R have no idea just how much their interactions will change things forever.

Marion has given a whole new definition to the idea of zombies and I like that. Zombies are always portrayed in movies and TV as lifeless beings that have lost all touch with anything that ever made them human. The idea that there is still something worth saving is inspirational and adds a whole different dynamic to how zombies could be written and described. I think that Marion took a lot of risks writing on a genre that is so insanely popular right now. He gave it his own innovative spin and I would say that the risk has definitely paid off. I hope to see the movie now that I have finished the book.

For me, the defining points in this novel are ***SPOILER***how the zombies not only eat brains to feed themselves but to relive the memories of the person that they’re eating because it makes them feel, well, alive. The integration of Perry’s thoughts and memories with R’s and how deeply he was affected by them (and ultimately how it changed him) ***END SPOILER*** were really well done and were some of my favourite chapters in this novel. Also, Marion answered some of the questions that other zombie works skim over: he went into detail about how the zombies collaborated, how their bodies and brains worked and that they were capable of thought.

The scene that shook me the most in this novel has to be ***SPOILER*** near the end when Julie and R are trying to revolutionize change; the last encounter that they have with Juile’s dad… when he just gave up after seeing Julie side with R and then just let that lead Boney devour him without fighting back. The emotional states of all the characters were so well described and detailed that I believed this is how a zombie invasion would actually feel like. It was heart wrenching to envision this scene. Juile, losing both of her parents because they inevitably gave up and could not go on after fighting for this long against all odds. Julie’s resilience and push to strive for more and keep hope was impressive all considering what humanity and herself had faced. Her hope outlasted in the end to bring around a cure with the help of R ***END SPOILER***. ***ADDITION*** Having now seen the movie, I was both relieved and disappointed that they changed this ending with film.***

Marion does have a prequel to this novel which focuses on Julie, Perry and Nora’s story and I’m currently trying to get my hands on a copy. It’s called The New Hunger.

I would highly recommend this novel for anyone looking for something different.