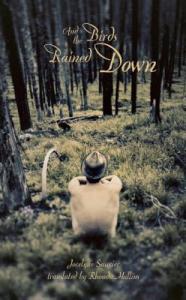 I’ve now read three out of the five books for Canada Reads 2015. While I couldn’t get all of the books read for the debates that happened this last week, I will finish all five! I will discuss the choice of the winner and my collective thoughts on all five books in a post once I’ve finished them all.

Now, this book, is astonishingly beautiful. Death and aging are aspects of life that no one ever likes to discuss, admit or confront. It’s one of the few things that we have no control over in our lives, but for Tom and Charlie, two older gentleman, they choose to live the rest of their lives on their own terms and make the conversation of death a welcome topic of conversation. Tom and Charlie live out in some remote woods with no connection to the modern world, with their only companions being that of their dogs and two pot growers. Tom enjoys his drink, most of the time a bit too much. but he is charming and loves to reminisce, whereas Charlie is more reserved and keeps to himself a bit more.  However, things are about to change for the two men.

A curious female photographer, looking for their very recently deceased friend, Ted, surprises the men with her ability to get to their remote homes without alarming their dogs. She has come to document and photograph the remaining individuals who lived through the great and devastating fires that spread through Northern Ontario at the beginning of the century, an event which Ted had lived through and was quite reclusive about. Rumors, stories and her own detective work had finally brought the photographer to the right place but just not in time. However, the brief hospitality that she received was enough for her to return as Tom and Charlie were intriguing on their own. What ends up making the photographer a consistent returning visitor is the appearance of Gertrude, who is one of the pot grower’s aunts. Gertrude has broken her out of a psychiatric ward where she had lived her whole life. Gertrude’s story is extremely tragic, but she finally has the opportunity to live her own life. The men don’t know what to do with a woman, especially one that knows nothing about living in the woods, but they know they can’t let her go back to where she came from so they happily accommodate her. For Charlie, the appearance of Gertrude will change him forever and give him a new life and new perspective on death.

While originally written in French, the beauty of this book is not lost in translation. It’s easy to relate to the characters, no matter what age you are and their story is a reminder to us that it’s never too late for a second chance at life. However, in terms of Canada Reads, it doesn’t quite fit the bill for the theme this year, which is breaking barriers. The choices that Tom and Charlie make, to meet death on their own terms, really shows more determination than anything else. I suppose they do break some barriers in that they are choosing to live such a remote lifestyle, but I don’t think it’s enough.  So while this book has been my favourite so far, I am not surprised that it didn’t win and was taken out of the debate early on.

If you’ve ever contemplated your own mortality or position in life, then I would highly recommend reading this refreshing book.

2 thoughts on “And The Birds Rained Down by Jocelyne Saucier”