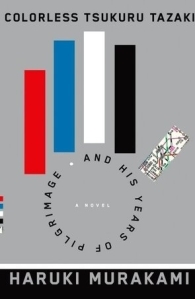 This is now the second book I’ve read by Murakami and he is quickly becoming one of my favourite authors. Murakami has a way of reaching into his readers souls, in a sometimes abstract, but also profound and wonderful way.

Tsukuru is complete in his group of four friends, two girls and two boys. The five of them have an other worldly connection, however Tsukuru has always felt a little bit different from his friends. All of his friend’s last names relate to a color in the Japanese language, whereas Tsukuru’s means “to build”. Tsukuru and his friends use these colors as nicknames: Aka (red), Ao (blue), Shiro (white), Kuru (black) and they occasionally. but harmlessly, tease Tsukuru by calling him Colorless Tsukuru. After high school, Tsukuru moves to Tokyo, away from his dear friends in order to go to university so that he can learn to build trains, one of his passions. Tsukuru goes back and visits his friends as often as he can but during one of his visits his friends suddenly stop returning his calls and just like that, Colorless Tsukuru loses the people he cares about the most. He doesn’t ask or pursue why for nearly 15 years as the loss was just too devastating. The event changes his life forever and Tsukuru has to learn to define himself without the connections of his friends. Over the years Tsukuru struggles to maintain relationships and his happiness until he meets a young woman named Sara. This intriguing young woman, ignites something in Tsukuru and she pushes him to to look into his past and close some of the emotional wounds that are still weeping after his friends abandoned him.

Tsukuru story is about the journey we take to learn and define ourselves and the necessary sacrifices and risks that come with it, especially in terms of love.  The book also deeply touches on regret and reflects the situations where should have taken action. For Tsukuru, some of his regrets take form in his dreams. The book is also about change, mostly positive change, and how our personal growth  shapes and changes us based on the scenarios we go through and how we suffer.

I read this book over the Christmas holidays, which is always a busy time, but I wanted nothing more than to just sit down and devour this book. The book just spoke to me, which I believe it’s meant to, on a very generic scale, but I mean that in a good way. There are qualities and emotions that Murakami’s characters exude that almost any reader can relate to, a quality which,  many writer’s have, but I think Murakami’s characters go further than that. Readers start to look inward while examining Murakami’s characters. Like with Tsukuru,  his regrets and anguish make a reader look inward and examine their remaining scars, wounds and regrets that they’re still dealing with and through Tsukuru’s story, the reader feels a bit braver to deal with their own situation or perhaps a bit calmer after coming to terms with their own regrets.

Additionally, the writing is amazing. Even thought Murakami writes in Japanese, nothing gets lost in translation and every sentence is just as essential and potent in English.

Honestly, I would like to recommend this book to everyone and I’d be surprised if this book doesn’t remain one of my favourite reads of 2015. Great read!