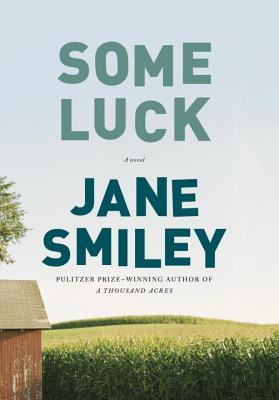 After falling in love with A Thousand Acres, I was looking forward to reading this new novel. Some Luck is the first book in trilogy that follows the life and times of an Iowa based family. The story starts in 1920 with each chapter being the beginning of a new year. This book ends in the year 1953 but the trilogy is supposed to follow to family for 100 years.

The story opens with how Rosanna and Walter Langdon came to be married in the early 1920’s and Walter’s stubborn endeavors to be a farmer. The two of them are well suited for each other and soon start to build their family. The narration switches between Rosanna and Walter, that is until the birth of the their first child, Frank. Smiley ingeniously narrates some chapters from Frank’s perspective as a baby and as a young child. Additionally, the narration continues with each child that the couple delivers and the plot eventually changes from Iowa as well. Frank is apart of a World War and is a gifted college student, while Joe, the Langdon’s second son, is sensitive young man and chooses to stay and farm. Claire, their eldest daughter, ends up eloping with a stranger to another city. Henry and Claire are the Langdon’s youngest children and will likely have more attention given to them in the next book. I particularly enjoy Rosanna’s narration and how she handled the birth and growth of each of her children. Her experiences with each child were so individual and unique from one another and I imagine that after having that many children, her feelings are fairly accurate for that day and age.

Her writing is solid and her characters are extremely well developed and you get to watch so many of them grow so you do end up wanting to know how each character is going to change, evolve and deal with the challenges that life is going to throw at them. It’s just that there isn’t one major conflict or antagonist that carries the plot. The story line is literally about life, so challenges happen often and the characters move on from each of them, just like real life.

Why read a book about real life? Well that’s a good question, this is why the book has mixed reviews. The book is well written and a good read but depending on the reader it may or may not appeal. I enjoyed reading about a time frame that I was not born into as Smiley’s portrayal was very intriguing. I also loved and hated a few characters so I wanted to know what their adult life would be like but if you’re the type of reader that requires a story that’s a bit more objective this book may not be for you.