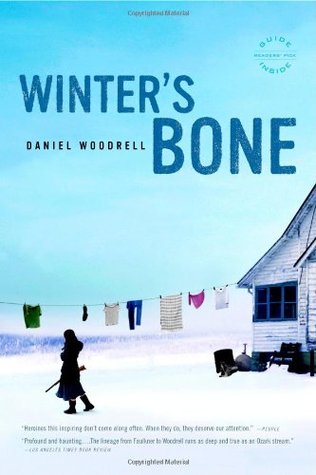 Winter’s Bone was a delicate surprise. This book is so expressive and the narrative reads like a beautiful and ardent poem. I read this passage at least three times because it read so wonderfully:

“Ree needed often to inject herself with pleasant sounds, stab those sounds past the constant screeching, squalling hubbub regular life raised inside her spirit, pole the soothing sounds past that racket and down deep where her jittering soul paced on a stone slab in a gray room, agitated and endlessly provoked but yearning to hear something that might bring a moment’s rest.” p.10

Ree is a tough and resilient teenager of sixteen. She has had to take care of her two brothers and her mentally ill mother as her father has been involved with cooking up crystal meth and has recently skipped bail, a practice that is being taken up by a few farmers in the Ozark area. Unfortunately for Ree, her father is missing and if he doesn’t make his court date they will lose their home. Determined to save her home, Ree starts looking for her father but she is finding out that there aren’t too many people in town, even from her own extended family, who are willing to assist her. There is a secret that is being kept from her in regards to her father and Ree will do whatever it takes to find out what that is despite what danger she may find herself in.

What makes this story remarkable isn’t the plot, as it’s fairly straight forward, but the character work. It’s absolutely impeccable. You feel for Ree but she is so remarkably tough. Having practically parented herself and raised both her brothers she is wise beyond her years and through Ree you start to get an idea of what her family is like and and see just how small the town is that she lives in. Woodrell is so masterful with his words, the book is short, yet you feel that you know so much about Ree. While the book is a bit dark, you find yourself just as determined as Ree so you never feel dismayed, enough though there are some difficult moments in the book.

I think that anyone could read this book, it’s just executed so well. I’ve heard mixed reviews on the movie but I haven’t actually seen it myself. I could see that the plot line might not be enticing enough on screen, isn’t that the beauty of a book? However, now that I’ve read the book, I will give the movie a go.

I’d say this is one of my favourite books of 2014 so far as it’s not very often you find a book that is this whole and well done. I’d recommend this novel to anyone looking for something intriguing, dark and beautiful.

One thought on “Winter’s Bone by Daniel Woodrell”