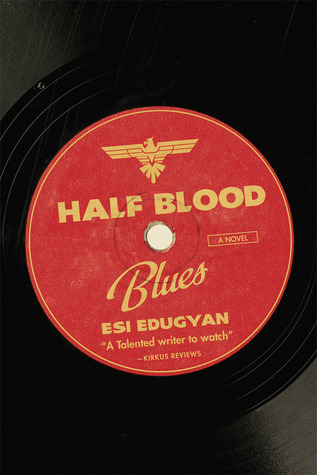 I can see why this book won awards. The author is Canadian, the novel discusses the dangers of being black during the Nazi’s reign as well mingling in the ever popular topic of jazz. These are three areas/topics that many critics appear to check off their list as a part of a good novel. The dynamics of the characters and content sounds like they should make for a very interesting plot, and while at times it did, I felt very disappointed with this award winner.

Sidney “Sid” Griffiths is the main voice in this novel. He is the bassist in the German/African-American jazz band, The Hot-Time Swingers. Other important members include Charles “Chip” Jones on drums and the ever young and talented Hiero (Hieronymus) Falk on horn. Paul, Fritz and Ernst are the other minor and additional characters in the band. The plot surrounds the bands survival amidst the Nazis. Sid was born in America and can often pass for being white, while Hiero is a “Mischling” a half-breed; he was born in Germany with a mix of German and African blood. His skin tone is quite dark as a result, making it substantially more difficult for him to get around during the Nazi invasion. One of the pinnacles of the story is that the famous Louis Armstrong has extreme interests in the talent of Hiero and he wants to record an album. The story the reader is involved in the most however, is the ever changing relationship  that Sid and Hiero have and the eventual regret and mistake that Sid makes with Hiero in which he will come to regret his entire life.

The chapters in the story are separated by different time-frames. For example, the story opens up in Paris in 1939 when the band is attempting to record the album. The next chapter is in Berlin in 1992 and here we see a very old and miserable Sid Griffiths. The book does this flip flop, unsuccessfully in my opinion, of time-frames to give the reader an idea of how much time has passed and how long Sid has been living with his one major regret. I found that the chapters were choppy and didn’t flow as nicely as they could have. I found myself at times going back to read an detail that was vaguely mentioned in the past but ends up becoming more important in the future.

I also felt that this book could have been more concisely written. The story and concept is good but it was carried out inefficiently. For example, there is a flashback scene with Sid and Chip as teenagers involving some prostitutes, which I believe is meant to show how long the two of them had been playing together. While it’s one of my favourite scenes, I feel it does little to build either of the characters or their relationship at this point in the story. We’re already aware of Sid and Chip’s past at this point, so while the scene was entertaining it had little to do with the main conflicts or developments.

While Sid and Chip are dynamic and interesting characters they’re not the most likable. Sid is negative and serious and Chip is a bit sleazy. Hiero is the most innocent and likable character but you actually learn very little about him throughout the book. I feel that this was probably intentional but I feel if we had known more about Hiero it would made the turning point in the book by far more poignant.

Overall, this book is very dynamic and it has reached out to a lot of readers with its content and awards. I’m glad I read the book as I like to support Canadian authors but I don’t foresee myself reading anything else by the author.

One thought on “Half-Blood Blues by Esi Edugyan”