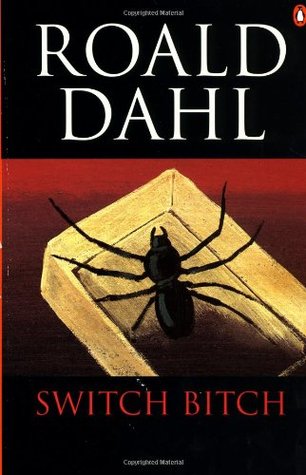 If you’re like most people, you know Roald Dahl for his wonder contributions to children’s literature. What most people don’t know is that he published quite a bit adult content and there is nothing child-friendly about these pieces. The stories in Switch Bitch were actually written for Playboy and published separately in 1965. Also, on a complete side note, did you know that Roald Dahl wrote two scripts based off the works of Ian Flemming, the author of the notorious James Bond series. One was Chitty Chitty Bang Bang and the other was the Bond film, You Only Live Twice . With the Bond film, it was the one Bond movie that was the furthest away from the plot and story line of the actual book by Flemming. So there you have it, now you know that Dahl was a successful bad-ass adult writer as well. You were just likely too young to know that before. I know I was.

In the story The Visitor, the main character of Oswald, whose womanizing adventures Dahl would eventually write a full length novel on called My Uncle Oswald, is one of the few stories in which by the time you finish the story you are satisfied and a bit less horrified with the outcome as Oswald is not a likeable character. Oswald is travelling in the middle east, where he has been bedding a lot of women and ditching them as soon as he can. In an effort to disappear from his last one night stand,  he finds himself stranded at a gas station in the middle of no where. The circumstances of the stranding are in themselves suspicious as the gas attendant appears to be physically suffering from a condition and is overly attentive to the weary Oswald who is terrified of catching whatever it is this man has. However, it appears to be Oswald’s lucky day as a rich man drives by shortly and offers for him to come and stay up in his mansion for the night while his car gets repaired. The man has a gorgeous wife and daughter. Outwardly, Oswald promises to be decent but inwardly he is already scheming to get one or both of the women into his bed. The events that follow are indeed maniacal and comical.

The Last Act, is by far the most cruel story in the book. I know that I felt particularly horrified and disgusted with the presumed ending of this story.  Anna Cooper finds herself widowed and it was like half of her soul was taken from her. She moves on but not willingly. After finding some moderate success in life after her husbands death she encounters the man who she was dating in high school before she met her late husband. What initially appears to be a promising romance turns into one of long held grudges and cruelty.

Honestly, there is something addicting about Dahl’s writing as I’ve devoured a few books of his short stories now. He is able to make his stories entertaining, funny and dark all at the same time. I believe he also has a great understanding of the human condition, both the good and the bad spectrum’s and he uses them to his advantage. If you are ready to shake up your childhood then I would highly recommend reading some of Dahl’s short stories and adult work. You can find one collection that compromises of the core of his short stories in, Twenty-Nine Kisses.