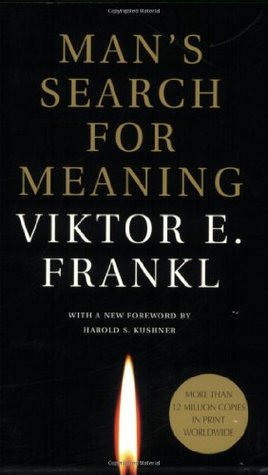 “…everything can be taken from a man but one thing: the last human freedoms–to choose one’s attitude in any given set of circumstances, to choose one’s own way.”

Viktor Frankl was a neurologist and psychiatrist as well as a Holocaust survivor. His observations as a scientist in combination with his experiences as a Holocaust victim allowed him to create a form of Psychotherapy called Logotherapy. Logotherapy was created with the Greek word “logos” which translates as “meaning” and is based off Kierkegaard’s “will to meaning”. This book was one of the first to define his new form of therapy which helped many Holocaust survivor’s get through their experiences.

This book is remarkable in so many ways and was unlike any Holocaust memoir that I’ve read. Viktor did not reiterate the horrors of the events he experienced but rather outlined what he did to get himself through it. Even more interestingly, was how academic the book was written. You don’t expect a memoir to be written in this manner but it was effective for what Viktor was trying to get across to his readers, which, in its simplest form, is about being able to choose a positive attitude, perspective and approach to your life and if you can find meaning within suffering. Or as Viktor quotes Nietzsche, “Those who have a ‘why’ to live, can bear with almost any ‘how‘”.  Viktor’s direct and brief writing style epitomizes his simple yet potent ideologies. However, if I had a criticism, I would say that his academic approach, while effective, I found that it takes way some of the emotional power of his story and his ideas a bit. With that also being said, his approach also meant that he was able to provide poignant advice without coming off like a self-help book.

Viktor’s story is inspirational and he truly makes us take a look at our own lives and what we have to grateful for and how we can use the power and reasoning of our minds to overcome any obstacle.  I would recommend this book to everyone as I believe that Viktor’s approach is effective and that we severely undermine the power of our own thoughts.

2 thoughts on “Man’s Search for Meaning by Viktor Frankl”